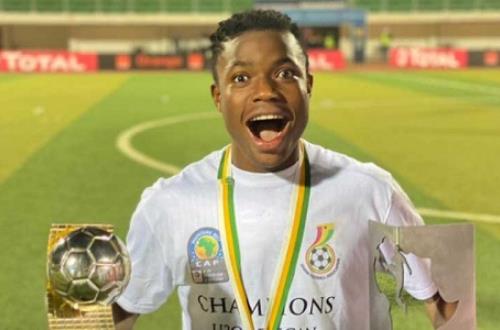 The U-20 Africa Championship winner was invited to the Black Stars for the double friendlies against Morocco and Ivory Coast this month.

Ghana lost to Morocco in Rabat before sharing spoils with Ivory Coast at the Cape Coast Stadium.

Despite failing to give him chance in the matches played, Akonnor speaking after the game on Saturday admitted he is already impressed with the talent of the 19-year-old.

According to him, Issahaku is a player for the future.

“I am amazed by Issahaku’s talent and I was hoping he comes on in the last 10 minutes against Ivory Coast but from the way the game was going, I couldn’t.

“I have had a chat with him and he is already happy to part of the Black Stars.

“He has a great future and he is the hope for the future and I wish him the best of luck,” he added.

Issahaku has been loaned to Portuguese side Sporting Lisbon from Premier League side, Liverpool.

Issahaku signed a 5-year deal for English giants Liverpool FC from local side, Steadfast FC for a fee rumoured to be around £1.5m.

He previously featured for the Ghana U17 team before gaining promotion to the U20 side to make his bow during the U20 Africa Cup of Nations at age 16.

Fatawu Issahaku managed to score two goals and an assist in 6 matches during the 2021 Africa Cup of Nations tourney held in Mauritania.