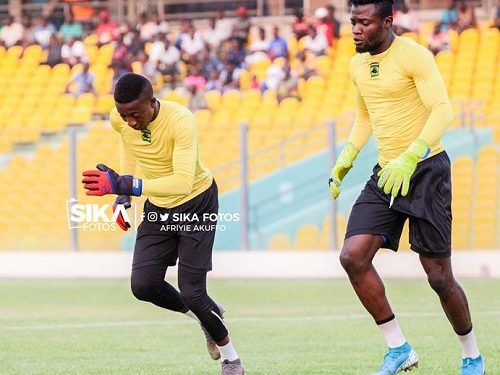 Captain for Kumasi Asante Kotoko, Felix Annan has laughed off reports suggesting that he is at loggerheads with the club's second-choice goalkeeper Kwame Baah.

Annan has not been in post for the Porcupine Warriors in any of their last five matches with the last time he featured for the club coming in a Match Week 4 clash against Medeama Sporting Club at the Tarkwa Akoon Community Park.

His place in those matches has been taken by second-choice goalkeeper Kwame Baah who looks to have earned the faith of head coach Maxwell Konadu.

In the last couple of days, reports have speculated that playing second fiddle to Kwame Baah has developed a rift with Felix Annan.

In responding to the claims in an interview on the Kotoko Express App, Felix Annan has revealed that he is in good terms with every player at the club.

“It’s quite funny when I hear this kind of thing, I don’t know where it comes from but to be the captain and leader of the club I don’t see myself having an issue with a player [teammate]. Why should I have an issue with the player?

“It’s never true, I have always been professional and I have always kept my respect for the guys [teammates] and it’s going great but for me, it’s football and we all have to support each other because at the end of the day it is Asante Kotoko we are serving but not an individual so all these rumors going around saying I am having issues with Kwame Baah or any player is never true", the Black Stars goalkeeper said.

He added, “We have a very good relationship, we are working very hard and we are pushing each other in training and you know, the best is for Asante Kotoko and not an individual as I said".