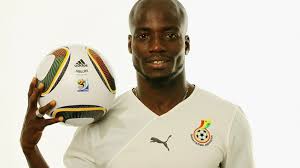 Appiah, 36, who captained the team for eight years has been tagged by many as the best ever Black Stars captain.

He led the team to qualify for teh 2006 World Cup in Germany.

Despite the rift among players recently, the former Hearts of Oak skipper speaking on Max TV said his teammates were helpful and that saw him have a successful tenure

“Eight years as the captain of the Black Stars, I never had any problem with any player.

"All the players that joined the Black Stars during my time helped me.

"They were top players and quality players as well," he added.

Appiah had carved a niche for himself as a stylish and composed attacking midfielder, who had a deadly eye for goal as well.

He played 67 times for the Black Stars and scored 14 goals.