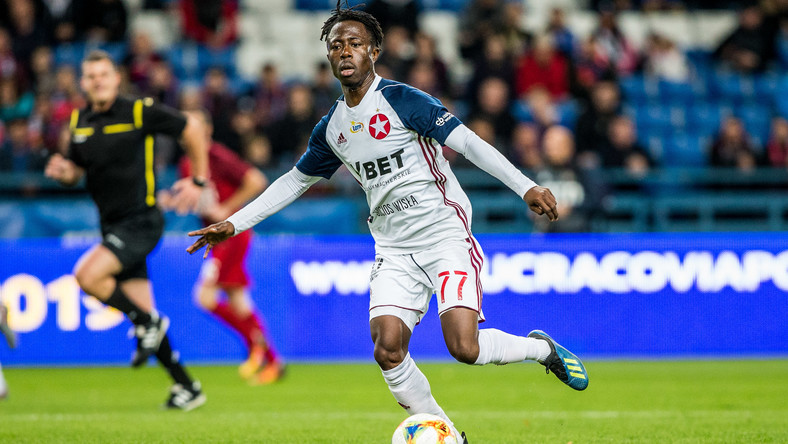 Until recently, Emmanuel Kumah played in midfield for a youth club with Mohammed Kudus. The latter is currently a player of Ajax, while the former decided to take a risk and decided to play in Wieczyla Krakow.

During the camp in Dubai, the footballer in an interview for "FutbolNews.pl", the 21-year-old, talked about the tests in Malaga, his performances in the national team, and the atmosphere in the perpetual locker room.

Where exactly are you from?

My family comes from a town called Seikwa and three generations lived in my family home - my grandparents, parents, older sister, and younger brother.

When did you get really interested in football? How old were you then?

My dad was a very good footballer. It is true that he did not have the opportunity to play professional football, but he took me to his training sessions, sharing his passion for football with me. I can say that it was with him that I became interested in this sport.

So I understand that football was in the first place at home from an early age?

Yes, football has been the most important thing in my daily life since then.

It was pure concrete without grass (laughs). It was difficult to control the ball in any way and your skin was ripped when you fell. So the falls were painful, but I didn't give up on my dreams.

Maybe the pitch didn't look great, but you could play there normally. I got there at a young age and at the age of thirteen, I got the chance to play against the seniors. It wasn't easy at first, but I got used to it over time.

And after a few years of playing, you got your first call-up to the U-20 team.

It was a great experience for me. Firstly, I was able to represent my country, which was an honor for me, but I also attracted the attention of scouts from Europe, including Wisla Krakow.

Before we move on to the topic of Vistula, your midfield partner was Mohammed Kudus, who now plays for Ajax on a regular basis. He was the best player in your team?

Mohammed was then one of the few of our team who trained in Europe. I loved playing with him in the middle of the field! He is definitely a very intelligent footballer who holds the ball well to his feet and already had a great technique back then.

I was playing with him in the middle then, but it wasn't my nominal position. I felt best as an attacking midfielder and my second choice was the left wing. But it turned out that I now play in the second position more often.

After all, you also left for Europe at a young age. Is this the only career opportunity for Ghanaian footballers?

We have had many talented players with great potential in Ghana for years. However, young footballers do not have sufficient facilities and equipment here. Therefore, everyone's dream is to travel to Europe as soon as possible, preferably right after their eighteenth birthday. Previously, this was not possible due to limitations. Unless one of your parents has a European passport, then things are a bit easier. And I had to wait a while.

Before the transfer to Wisła, were you testing in other European clubs?

Yes, as a 17-year-old I spent some time testing in Malaga, but I couldn't stay there longer because of what I told you a moment ago. I was not able to sign a contract with the club and the topic was simply lost. The regulations also stopped my transfer to Bologna - even though I was already eighteen. However, I couldn't stay any longer due to the reduction in the number of players from outside the European Union, despite the sincere intentions of the club to keep me.

Then I was testing Vienna in Austria and I was surprised by… snow! I've never seen snow before and had to play there. I guess that's why I didn't go there (laughs). It was better in Hoffenheim, which brought me and two other Ghanaian guys for testing. Again, the rules have failed me. Later, however, came the U-20 African Nations Cup, after which I ended up in Wisla Krakow.

Well, how did it happen that you finally landed in Krakow?

I learned that during the match of the national team under 20s against Algeria, I was noticed by Wisła scouts - Dariusz Stachowiak and Marcin Kuźba. First, they invited me for tests, and then I stayed there for longer.

What did you have the biggest problem with after arriving in Poland?

Certainly with the tongue. From the beginning of my stay in Wisła, I was learning Polish, but I had difficulties with absorbing the next words. Fortunately, I already know a lot more, so I don't have communication problems in my team.

And how was the acclimatization in the locker room?

At first I was scared, until I was afraid to approach anyone (laughs). However, it quickly turned out that the Wisła players are helpful. I think that during this time, Kuba Bartosz helped me the most, on whose support I could count on from the very beginning.

Your coach in Wisla was then Maciej Stolarczyk, who currently runs the Polish youth national team. How do you remember training under his leadership?

I am grateful to him because he decided that I should stay in Wisla longer after the end of the tests. I remember how he worked with me on tactics from the very beginning and gave me many valuable tips. It was important for me, the more that African players often have the most tactical problems after arriving in Europe. Coach Stolarczyk had a good approach to young players. When he was released from the Vistula River, it can be said that I was unlucky. Now, however, I trust Coach Cecherz and his staff and I can be satisfied with my work with them.

In Wisla, you have undoubtedly hit a bad moment, a series of defeats came and in such circumstances it is difficult to bet on a young footballer.

Yes, that's why I understood the decisions of the coaches and knew that they were doing it in good faith. The difficult time, however, did not make the atmosphere in the team spoiled. We just felt devastated and worried about future failures. However, the results did not affect our relationship in any way.

How did it happen that the youth representative of Ghana, who played in the league team, decided to continue his career in the district league?

I admit that I pondered this decision a bit. However, I did go to training and was positively surprised. The quality of the players' game, the work of the training staff, and the club administration exceeded my expectations. I was very pleased with what I saw and decided that maybe this is the place I should get involved with.

Besides, I am glad that I can play here with such experienced players as Peszko, Majewski or Madejski.

Maybe you could share some interesting stories from the locker room?

The humor of Radek Majewski can make us always have a good atmosphere in our cloakroom. Recently, he told us a story from when he started playing in England. His trainer asked him "how are you?" And he answered after three weeks (laughs).

Heard you struggled with the coronavirus at the end of the year. How did you go through this time?

I had no major problems, I felt good. The more that I could count on the support of both my teammates and other club employees. While I was in quarantine, they did my shopping, and I had no shortage of food, drinks, or other necessities.

Did you have a problem with returning to training afterwards?

While still in quarantine, I tried to train myself at home. I think it helped me get back to training with the team easily.

You are currently on a camp with the team in Dubai. You are probably all impressed with the conditions in which you are staying and training.

It's true, the owner of the Landlady does unbelievable things for us! We have everything in place in Dubai, and training runs smoothly. Of course, we like it here, but we are here primarily to train and that's what we focus on. And not to see the beauty of Dubai.

I feel really good here. I like Poles - they are helpful and they don't think about where you come from or what color your skin is. I have never felt any unpleasantness for these reasons.

What are your immediate future plans?

Once my big dream was to transfer to Europe and it was possible - thanks to my hard work and God's will. Maybe in the future, I will find myself in a stronger league, maybe in a different country. But now I would like to focus on Wisla - I want to play here and do my best.

Also, I have a plan to help my uncle bring Ghanaian players to Europe. I know that at the moment there is only one talented player in his team, maybe it's worth looking for a chance for him.