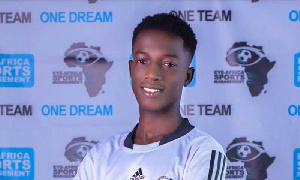 The 15-year-old scored a stupendous goal taking on four defenders plus the goalkeeper before putting the ball at the back of the net.

His goal forced the game to penalties where Golden Kicks emerge champions to book a place in the Division One League next season.

In an interview with Asempa FM, Mizak Asante disclosed he needed just a minute to prove his worth in the game.

“Whenever you play, you need to leave a mark. I have played at Baba Yara but it was my first time playing at the Accra Sports Stadium and I needed to make a case for myself”

“I was not all that fit that is why I started from the bench. While on the bench, I decided to prove my worth even if I get one minute in the game. I knew I was not fit but I needed one minute to perform miracles”

“I wanted to move to the team to another level, we were determined to beat our opponents to secure qualification to the Division One League. I was happy when I scored that goal but it is not the first time scoring such a goal. It has come to the public space because of the tension that was surrounding the game”