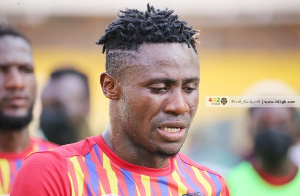 Former Hearts of Oak defender Nuru Sulley has downplayed assertions that he had a bad influence on his teammates during his stint with the club.

Sulley rejoined Hearts on a free transfer in April 2020 after leaving Iraqi club Naft Al-Basra where he spent less than a year when he left Al-Mina'a SC to join.

He recently parted ways with the rainbow boys due to lack of playing time.

The experienced central defender made 16 appearances for the Phobians last season, helping them to win the Ghana Premier League and the FA Cup.

Earlier reports in the local media suggested the former Black Stars B defender influenced the players negatively which subsequently affected the going of the club particularly in Africa.

But in an interview with Kumasi-based Fox FM monitored by Footballghana.com, Sulley rubbished the claims.

“I have no problem with coach Samuel Boadu. He even calls me at home sometimes but at a point I was feeling very bad because it got to a time, I felt I deserve some playing time”

“I feel bad when people allege, I’m the one influencing the players, it doesn’t make sense. How can I instruct players to do this when these players benefit when we win a game?

“I came with a good heart to rejoin the club, I sacrificed for the club without receiving a signing on fee and a lot of benefits. It was my wish to win the league with the club which materialized and I was happy for that”

“I still love the club and I wish them well. I will miss them so much”

“I was on the bench in the game against Saoura so I feel disappointed in anyone who wants to blame me. The supporters must remain calm and continue offering their support to the team”

“I was part of the team, played most of the matches for the team to win the league so at least I deserve some commendation”