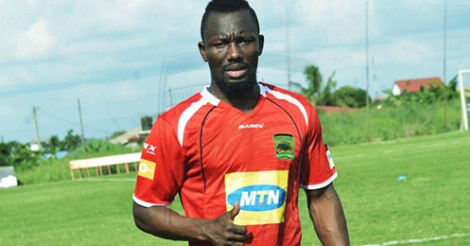 Former Black Stars striker, Saddick Adams has disclosed that he was the highest-paid player at Asante Kotoko during his two-year stay at the club.

The 30-year-old attacker was signed by the Porcupine Warriors in 2017 and went on to play two years which in truth went quite well.

Not only did he score some important penalties to win games for the Reds, his outstanding hat-trick against Hearts of Oak in the finals of the 2017 MTN FA Cup final handed Kotoko the title on the back of a 3-1 victory.

Speaking to Kumasi-based Angel FM in an interview on Wednesday, Saddick Adams has confirmed that he received the highest salary during his time as a Porcupine Warrior.

He explained, “I never received 5000 CEDI's as salaries during my stay at Kotoko I was actually earning 2000 Ghana CEDI's as the highest-paid Kotoko star Man then”

Adams added “I have never taken the amount quoted by a section of Kotoko faithfuls and the media”.

The former Atletico Madrid striker is now a free agent but has a dream of playing for Hearts of Oak before he hangs his boots.