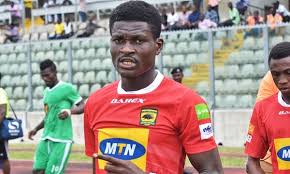 Highly-rated center-back Emmanuel Agyemang Badu has disclosed that he was wanted by Medeama SC and Obuasi Ashanti Gold prior to his move to Asante Kotoko.

The defender completed a move to join the Porcupine Warriors in 2018 when youth trainer Paa Kwesi Fabin was in charge of the club as their head coach.

Opening up on the months leading to his transfer to the Kumasi-based outfit in an interview on the Kotoko Express App, Emmanuel Agyemang Badu has revealed that there were strong interest from Medeama SC and Obuasi Ashanti Gold.

According to him, he has always been a fan of Asante Kotoko since childhood and when they came calling, he ignored all the offers from the other clubs and committed his future to the Reds.

Two years after making that decision, he is now enjoying life with the Ghana Premier League record-holders where he has been one of their best defenders this season.

Watch Badu's interview on the Kotoko Express App below.