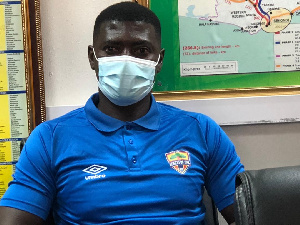 Newly appointed Hearts of Oak coach Samuel Boadu has vowed to do his best for the club after confirmation of his appointment.

Boadu's appointment as Hearts of Oak coach was confirmed on Monday. This comes barely a week after he shockingly resigned from Medeama.

According to him, his appointment has come at the right time having sighted the job for quite a long time.