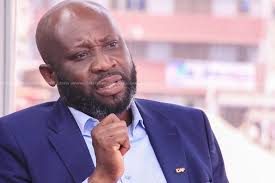 Former vice president of the Ghana Football Association (GFA), Mr. George Afriyie has reiterated that he will focus on putting up more infrastructure when he is elected as the new president of the football governing body.

The Okyeman Planners bankroller is one of at least six football administrators who have declared their intentions to run for the top job at the FA which has been vacant for the past year.

Speaking in an interview with Citi Tv even before he launches his manifesto for the upcoming primaries, George Afriyie has shared that he will tackle the infrastructure deficit in the country because it is one of the main reason the sport is lacking behind when compared to other parts of the continent.

“I will deal more with infrastructure. The beautiful game can be watched all over the world. I believe strongly and I have said it several times that I don't believe that the quality of football in South Africa is better than the Ghana football”, he said.

He further explained, “It is only because it is packaged well and it is branded well. On field of play we have skillful players, we have players who are more talented than the South Africans. That's my belief”.

“If we can have all the League centers in a standard form of Standard pitch with standard arrangements, trust me it will be beautiful to watch Ghana football”.