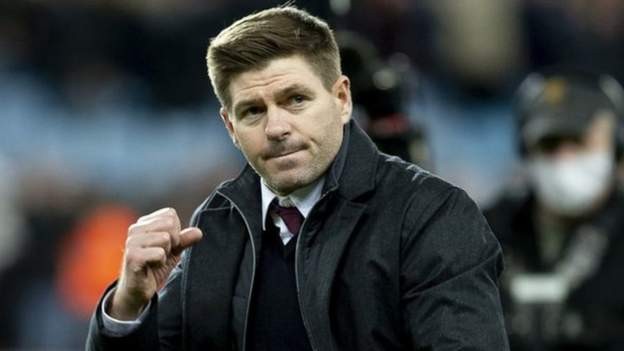 It has been a long time since Steven Gerrard last ran away in celebration on a Premier League pitch.

May 2015 in all probability, when he scored the equaliser in Liverpool's 1-1 draw with Chelsea.

But it was almost like the years rolled back when Tyrone Mings slammed home the match-sealing second to ensure Gerrard's first game as Aston Villa manager ended in victory.

Now 41, Gerrard still looks like a player. As Mings' first-time effort hit the net his manager spun round and ran away in celebration. It was not a Jose Mourinho style length-of-the-field job but it was noticeable. That feeling of ecstasy he was so used to in his brilliant playing career.

Gerrard soon calmed down and was quickly talking to his staff to ensure he hadn't missed anything as Villa began the task of seeing out the four minutes of injury time.

But the celebration confirmed the truth. Forget about stepping stones and gambles. Gerrard has come to Villa to be a success - and in that task, he is all in.

"I will always be as authentic as I can," he said. "If anyone doubts me watch me after those goals. That is real.

"They are the buzzes, the highs you miss as a player. They are why you want to stay in the game. They are my medicine."

'You should see me in staff games'

Villa are a huge club, one of England's biggest. But that is not something that phases Gerrard, given his domestic experiences are covered by Liverpool and Rangers, whose crowds and history are even bigger.

The sense of purpose evident from his unveiling press conference 48 hours earlier was apparent again on matchday as he strode out of the tunnel in the corner of the stadium, down the touchline to his technical area.

He took his place by the touchline as the first whistle blew and his seat remained unoccupied until the end.

With either his hands in pockets or crossed across his chest, Gerrard was a study of calm instruction, the first bit of which was imparted within 30 seconds, to Danny Ings, about the shape of his run. Gerrard is not a massively demonstrative coach or a particularly angry one.

He did throw his chewing gum away quite early as Villa conceded a corner and from the press box you could faintly hear him calling Matt Targett, who was 20 yards away. There were also a few minor complaints to the officials and a look of anguished frustration as John McGinn passed up a chance to shoot when the game was still level and looked like ending that way.

But mostly, Gerrard looked to be in control, which is what he wants, even if the reality is somewhat different.

"You are trying to control your emotions, but inside you are kicking every ball," he said.

"I want to coach from the side, I want to be visible and help them, guide them. Inside is what was with me as a player, that will to win, that drive. You should see me in staff games, five v five, six v six, I hate losing."

Gerrard's first post-match evening as an Aston Villa manager was a good one. Over an hour after the final whistle he was back on the pitch, minus his tie, as his children risked a kickaround while the groundsmen - notoriously protective of their work - did their stuff.

There are clearly many challenges ahead - and much work to do. But in winning for the first time since September, Villa were making Gerrard only the third new boss in 13 - after Gerard Houllier and John Gregory - to enjoy winning starts at the club as manager.

"What do I feel? Probably a combination of things," he said. "This was a big week and a big game on the back of losing five [in a row], so it is a mixture of excitement and relief and pride.

"I can't be any more proud of the players. Everything we have asked them to do they have followed the instructions.

"I love seeing the players happy and smiling. We were a bit tense at times but I thought we finished the game extremely strongly. We have got a lot of things to build on. In time we will become stronger and grow and get better."

'Being a surgeon shows you life is precious': In this job even a small mistake is catastrophicBrand New Top Gear: The boys have a showdown with a trio of F1's finest drivers