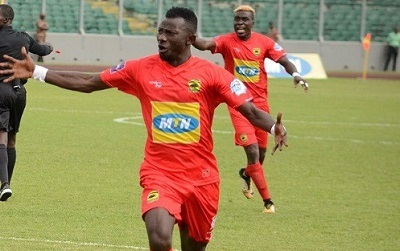 Former Kumasi Asante Kotoko midfielder, Jordan Opoku has confessed being a wizard which normally aides him to play at his best.

According to him, he plays his games on bed before match days and for that matter, before a ball comes to him, he has already thought of where he will pass the ball to.

Speaking to Jeffries Kwabena Sintim-Koree of Television CK, he said, “I have witchcraft but I only use it in football. Every day it is always perfect and happens automatically. Before the ball comes to me, I know where I’ll pass the ball to. I play my games while asleep before match days”

"I'm a magician, so i can do whatever i like with the ball in games"

Jordan Opoku who now ply his trade for Brekum Chelsea explained that he doesn’t get tired in games because he does not waste much time on the ball at his feet and gives simple passes.

“When a ball comes to me, I control and pass that’s why I don’t get tired. My position I play I don’t think any home-based player is better than me. I’m a football magician and can use the ball to do anything I want.”

Jordan known in football circles as ‘Akata Pore’ have had spells with clubs both locally and internationally.

He also made his debut for the Black Stars in 2009 in a friendly against Argentina and has since played nine games for the Ghana national team.