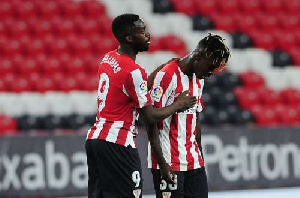 Spanish-born duo of Ghanaian descent Inaki Williams and Nico Williams are expected to make their debut for Ghana and Spain respectively.

The pair who plies their trade for Athletic Bilbao will not be featuring for the same national team despite being brothers.

The 28-year-old earned his maiden call up for the friendlies against Brazil and Nicaragua this week and he is expected to start in attack for Ghana when they take on five times world champions Brazil in Le Havre on Friday night.

Williams, whose younger brother Nico Williams, earned an invite to represent Spain is likely to make his debut against Switzerland.

The fast-rising winger could have some few minutes to test his abilities and, in the process, close the option so that Ghana can forget about him for a while.