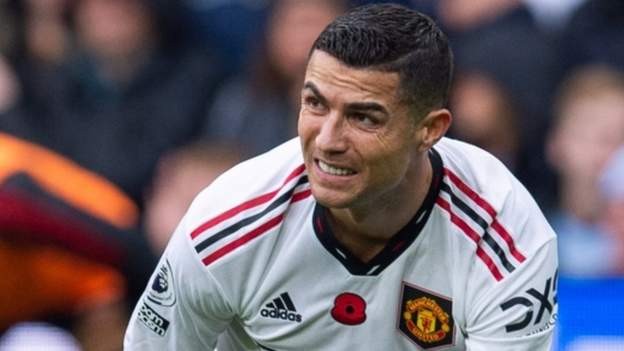 Both parties said on Tuesday they had "mutually agreed" for Ronaldo to leave the club with immediate effect.

Last summer the Portugal forward, 37, told United he wanted to leave and he criticised the club in a controversial interview last week.

"Both parties have got what they wanted," Ferdinand told the BBC.

"When he mentioned in August he was going to reveal some of the details behind the scenes, this was almost like a ticking timebomb.

"I think he felt he was pushed into a corner, in his own mind, and he did what he did [the interview] to get this outcome.

"He put the club in a position where it was an untenable situation. Was it handled perfectly? I think, from both parties, no. But if you look at the end game, they've got to where he and the club, through the manager's eyes, wanted to get to."

He arrived at Old Trafford with the reputation of being a disciplinarian and it was unclear how Ronaldo would fit into his tactics once the club had decided not to sell the player.

The Dutchman has had to discipline Ronaldo this season but the Portuguese was captain for what proved to be his final game for the club, a defeat at Aston Villa.

And Ronaldo said in his interview with Piers Morgan for TalkTV that he does not respect Ten Hag.

"In the end, everybody loses, except the Manchester United manager," former Manchester City and Belgium defender Vincent Kompany said during the BBC's World Cup overage.

"It's a problem that's resolved, they'll move on from this."

Ex-England captain Alan Shearer added: "It's a sad end to his Manchester United career. It was never going to be a match, Ten Hag and him.

"It will be really interesting to see if a Champions League club comes in for him."

Former United team-mate Wayne Rooney, whom Ronaldo criticised in the interview, told Indian broadcaster Viacom18 Sports: "It's a shame because he's been a fantastic servant for United.

This was the only possible outcome once the full extent of Cristiano Ronaldo's broadside was known.

The fact club and player have separated so quickly and without clauses underlines the futility of negotiation and now both can move on.

On both sides, the sadness comes from a potentially transformative move that simply failed due to lack of forward-planning.

Having finished second in the final full season under Ole Gunnar Solskjaer, the belief was Ronaldo could turn United into title contenders.

However, the hope evaporated as United's form collapsed and once Solskjaer was sacked, Ronaldo's status as a totemic striker was undermined by the knowledge he was required to be the focal point of a pressing team, something alien to the Portuguese in his pomp, let alone as a 36-year-old.

Had United's squad contained mobile players with the ability to drop passes into the right areas, Ronaldo could still have prospered.

But it doesn't, and although interim manager Ralf Rangnick did not have the power to oust the Premier League's most highly paid player, once Erik ten Hag was named as Solskjaer's successor, confrontation seemed inevitable.

Many feel the final outcome could have been avoided. Equally, many felt once Ronaldo refused to come on against Tottenham, he would never play for the club again.

Instead the additional couple of weeks just brought festering discontentment to a head.

Given his status, Ronaldo felt he was entitled to get his point across. He knows what it takes to win and saw a club that is miles off.

It will now be fascinating to see if Ronaldo remains in the Premier League.

As for United, they have invested a lot in Ten Hag. They believe the Dutchman has them on the right path. Time will tell whether they are right.

You can now get Man Utd news notifications in the BBC Sport app - find out morePodcast: The Devils' Advocate - listen to the latest episode on BBC Sounds

August 2021: Rejoins United from Juventus on two-year contract, with option of another year.September 2021: Scores twice in first game back at Old Trafford, a 4-1 win over Newcastle.September 2021: Becomes Champions League's record appearance-maker and scores stoppage-time winner in 2-1 win over Villarreal.December 2021: Scores twice in 3-2 win over Arsenal to reach 800 career goals.January 2022: Reacts angrily to being substituted by Ralf Rangnick during 3-1 win at Brentford.March 2022: Scores hat-trick in 3-2 win over Tottenham.April 2022: Scores another hat-trick, this time in 3-2 win over Norwich.May 2022: Finishes the season with 18 Premier League goals, third in the Golden Boot standings, while United finish sixth.July 2022: Tells United he wants to leave club after missing out on Champions League qualification, then allowed to miss pre-season tour of Thailand and Australia for personal reasons.July 2022: Leaves friendly against Rayo Vallecano early after being replaced at half-time, which Erik ten Hag calls "unacceptable".August 2022: Plays the full game as United lose 4-0 at Brentford.October 2022: Comes off the bench to score 700th club goal in 2-1 win at Everton.October 2022: Leaves Old Trafford before full-time while a substitute for Premier League win over Tottenham.November 2022: Says he feels "betrayed" by United in an interview with Piers Morgan for TalkTV.

Manchester United fan Alex Turk, from YouTube channel Streford Paddock, says Ten Hag has "proven he can handle the game's biggest personalities and solved one of his squad's major dilemmas".

"It feels like a weight has been lifted and his rebuild can accelerate. United have backed their manager in this spat with one of the club's greatest icons. Now it's time to back him with a striker of his desire in January. That's the next step."

And here is how you reacted to the news...

Mike: Been a great player, but can't accept he's no longer at his peak; narcissistic enough to think everything should revolve around him in perpetuity; petulant & disruptive when it doesn't. So keen to stand on his dignity that he lost it altogether.

Paul J: Like many, I was excited by his return at first. However, on the outside I could see that there were cracks being papered over on Ronaldo's part. No one player is bigger than a club no matter how the situation is. A club is a club. If you do not feel or want to be part of that club then there is always the outside world. Some clubs are better off without the toxic attention seekers.

Phil: Ten Hag could have released Ronaldo when Ronaldo initially asked. To me Ten Hag was trying to be The Big I Am!!

Richard: Erik ten Hag has played this whole scenario masterfully. He's got what he wanted and come out smelling of roses. Thanks for the memories, Cristiano, but we're better off without you.

Laurence: Ronaldo couldn't accept he is getting old and refused to be a team player, assuming it should all be about him. Thanks for the memories but goodbye.

Sarah: I think United are entirely to blame. Ronaldo had other offers and was persuaded to come back to United. They have let him down and I am not surprised he feels betrayed. Ten Hag has no class or respect for Ronaldo's history with United.