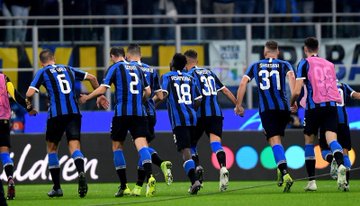 Asamoah lasted for 80 minutes before being replaced by Cristiano Braghi as the Nerazzuri's secured their first win in the Champions League this season at the San Siro.

He put up an incredible performance as he played a more advanced role after he was shifted into midfielder by manager Antonio Conte.

Inter took the lead in the 22nd minute of the game courtesy Laturo Martinez strike, having received a perfectly lobbed pass from De Vrij before scoring home the opener.

Andrea Candreva doubled the home side's lead with a minute left to play after a misplaced ball in the middle was received by Marcel Brozovic who fed the Italian forward.

After the game, the Ghana international took to his personal twitter handle to express his delight.