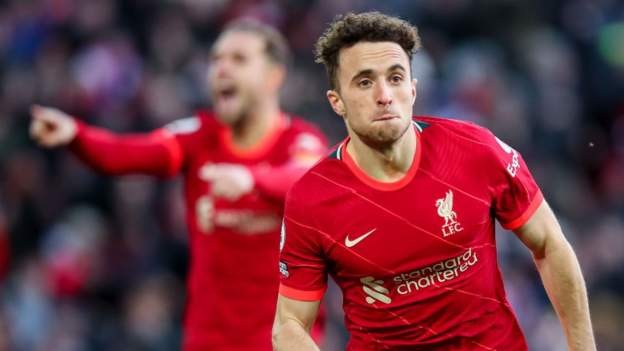 Towards the end of Saturday's thumping 4-0 win against Southampton, Liverpool fans had become so restless waiting for another goal they were urging their players to shoot from anywhere on the pitch.

That was after just 30 minutes without seeing the ball hit the back of the net, imagine if they actually fail to score in a game this season.

Liverpool have scored in every Premier League fixture so far this term. They've got at least two goals in each of their last 17 games in all competitions - the best top-fight run by an English side in almost 100 years.

With 39 goals in their 13 league games so far, this is the most the Reds have scored at this stage of a top-flight campaign, surpassing even their 2019-20 title-winning season.

After moving up to second in the table by beating Saints, are Liverpool now at their fluid best with Diogo Jota playing a vital role?

The goal-scoring exploits of Mohamed Salah have rightly taken many of the Liverpool headlines this season, but against Southampton it was clear to see just how well the front three of Salah, Sadio Mane and Jota work together.

For so long Roberto Firmino played that central forward role so well, but Jota is now making his mark in that position.

His predatory instincts are pivotal as Salah and Mane use their pace and trickery to pull apart defenders, as was evident against Southampton with both players involved in Jota's two goals.

But Jota has also shown he is just as capable playing anywhere across the front three and his contribution this season has been clear to see - 10 starts, seven goals and one assist.

Since joining from Wolves in September last year he has scored 20 goals in 46 games in all competitions - an impressive record, especially considering he was out for three months last season with a knee injury.

"He is the perfect signing. He has everything a Liverpool player in this squad needs. He has technical skills, physical skills and he is very smart and can learn the tactical stuff pretty quick.

"He can also play the three positions and has the speed to finish things off. Really good."

Liverpool's tally of 39 goals after 13 games is nine more than they managed in their title-winning campaign and 10 more than they had at the same stage last season.

The Reds were unable to stage a successful defence of the Premier League trophy last term as they struggled with a defensive injury crisis, but with their key players back fit this term they are looking a much more complete side.

"I knew what we were lacking [last season], we were lacking stability," said Klopp. "No centre-half for a while and we had to find solutions to that. We were shocked and could not play the football we can.

"Now we have stability. Everyone knows what they have to do.

"Sadio Mane and Mo Salah had the longest pre-season I am pretty sure they had for ages, and that was helpful and we could work on a lot of things. We have got the stability back."

Saints boss Ralph Hasenhuttl also feels Liverpool have their ruthless streak back. Since letting slip a two-goal lead against Brighton at the end of last month, Liverpool have scored 14 goals in five games, conceding just two.

"This team is really on fire at the moment," he said. "They didn't make the mistake they made against Brighton and stop after 2-0, they kept going."

Last season may not have brought a trophy for Liverpool but it was nevertheless a useful experience for Klopp.

To combat injuries in defence, Klopp altered his midfield options by playing Fabinho at the back, something the German felt ultimately disrupted his side's fluidity going forward.

"I learned a lot," Klopp said. "It is like that. I make mistakes.

"[When you] lose a centre-half it's like breaking a leg, but if you put the midfielders then in the last line and open up other gaps, then you break your spine and all of a sudden you cannot walk anymore. That's exactly like it was last year.

"It was not a lost season, I learned more than in other seasons."