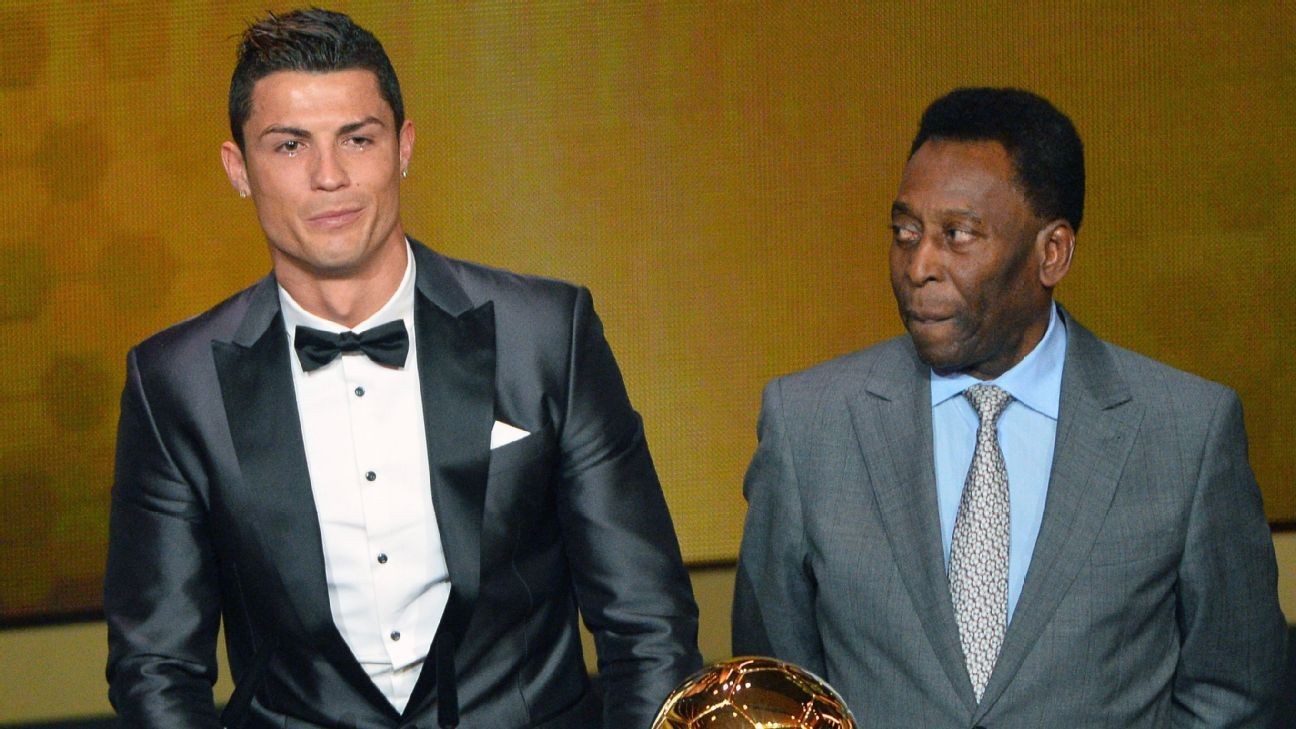 Cristiano Ronaldo has grown accustomed to breaking one goal-scoring record after another, but the latest milestone might just be the most important of his career.

By scoring against Napoli in a 2-0 win in the Italian Supercup on Wednesday, Ronaldo scored the 760th goal of his professional career and, therefore, apparently passed the reported tally achieved by Austrian-born Czech striker Josef Bican (759*).

On Jan. 4 it was reported that Ronaldo's two goals against Udinese saw him pass Brazil legend Pele (757*), arguably the greatest goal scorer of all-time, and took him to within one strike of the top. However, there's still an air of uncertainty as to whether Ronaldo is now indeed the new all-time record holder. And is Pele's number actually 767? Or 1,283?

Ronaldo's individual tally isn't in question as all of his goals are official and accounted for -- most of them have been televised or, at the very least, reliably catalogued. The Portuguese forward scored five goals for Sporting CP at the very start of his professional career, 118 for Manchester United, 450 for Real Madrid, 85 for Juventus and 102 at international level, giving him 760 in total.

But the individual tallies* belonging to the other players in the upper echelons of the list are very much open to question. For example, the Czech Football Association claim that Bican, a prolific Slavia Prague legend of the 1930s and 1940s, actually scored a total of 821 goals between 1931 and 1955.

The best goalscorer in football history? 🤔

The History and Statistics committee of the Czech FA counted all the goals scored by the legendary Josef Bican and we can declare he scored 821 goals in official matches.

Due to a lack of reliable records and scant information from that period, it's difficult to accurately ascertain just how many goals Bican rattled away during his active playing career. The Czech Football Association's figure has a rather more definitive ring to it than the somewhat vague tally of "at least 805" listed by both FIFA and the Rec.Sport.Soccer Statistics Foundation (RSSSF), the online database of historical soccer statistics that's used as a general guide by several mainstream sports media outlets, including ESPN.

Elsewhere, Wikipedia lists Bican as having scored 823 career goals overall -- a tally they arrived at by melding information from the Czech FA and RSSSF. Bican's total is also often cited as 759 by a wide variety of other broadcasters and media outlets, but there doesn't appear to be a definitive source offered for that number, which merely serves to highlight the questionable nature of the stats involved.

Josef Bican holds top spot in all-time goals, according to some records. GettyWhy do the totals differ?

Just as with Bican, the same issues always arise when discussing and dissecting the exact amount of goals scored by Pele. While the number of "official" goals scored by the three-time World Cup winner is clocked at 767 (more on that below), Pele's precise goal count continues to be the subject of ongoing dispute. The former Santos and New York Cosmos striker's tally varies wildly, depending on which source you choose to consult and which goals count.

Pele himself would have us believe he scored a total of 1,283 goals. The Brazil legend denied reports that he altered his Instagram bio to include "Leading Goal Scorer of All Time (1,283)" to "overshadow" Lionel Messi and Ronaldo usurping his records, tweeting on Jan. 6: "I was accused by the press of having changed my Instagram bio to overshadow these big stars that are breaking my records. The bio text has always been the same since I joined the platform. None of this should distract us from your incredible achievements."

Meanwhile, both FIFA and South American football confederation CONMEBOL have stated that Pele's career statistics stand at 1,281 goals in 1,363 games.

However, FIFA have revised that, and generalise Pele's tally as simply "more than 1,200 goals." This is because both Pele's personal tally and FIFA's numbers include goals scored during youth matches, friendlies and exhibition games -- none of which are counted as part of any contemporary player's official goals total.

As far as the folks over at Guinness World Records are concerned, Pele's tally stands at 1,279 goals in 1,363 games and they confirm that as the world record. The reason for the count being two goals fewer than FIFA's tally is that they refuse to acknowledge the two goals Pele scored in "special appearances" for Santos after officially ending his playing career at New York Cosmos in 1977.

RSSSF has a different tally entirely. Pele is listed there as having scored 767 "official" goals in 831 games, which is boosted up to 1,284 goals in 1,375 appearances when friendly matches are added into the mix. The latter count includes a handful of goals scored after his retirement, coming in miscellaneous "all-star" and "benefit" games between 1977 and 1990.

Given the nature of data being collected in the pre-digital age, it's hard to know which figure is 100% reliable.

After examining the numbers, ESPN's Stats & Information Group has settled on 767 goals as the most accurate figure for Pele's official career total. That is the number of "official" goals he scored for Santos (643) and New York Cosmos (37) in domestic league and cup competitions as well as continental tournaments, plus the 77 scored for his national side, thus stripping away the disputed goals included by other sources at youth, amateur and non-competitive levels. But there's still another 10 to find.

The RSSSF total includes the one goal scored across three appearances for a "military team" (surely they don't mean in the 1981 movie "Escape to Victory"?) and nine goals in 13 games for a "Sao Paolo Selection" between 1959 and 1962, all while he was playing for Santos. And, given the level of detail in RSSSF's research, ESPN's Stats & Information Group is using that as its guide for Pele's career total, while acknowledging that these figures remain unconfirmed.

The man himself is famed for his boasts of having racked up a "personal total" of more than 1,000 goals in his career. He even employed a research team to go back and count his haul, leading him to score what he believed to his "1,000th" from the penalty spot while playing for Vasco da Gama in 2007, aged 41.

The goal was scored in the 48th minute and the game restarted 20 minutes later; such were the celebrations at the Sao Januario stadium as jubilant fans ran onto the pitch to hug and congratulate their hero. Romario was then presented with a special customised shirt by Vasco club president Eurico Miranda (with his name and the number 1,000 on the back) and allowed to complete a lap of honour before the game finally got under way again.

"It's a great pleasure to reach this target, which only one other player has managed," he said at the time, referring to Pele.

Unfortunately, despite all the pomp and romance, Romario's total is still very much disputed from an official standpoint, largely because his researchers counted goals scored in junior matches, friendlies and various other non-official and exhibition matches. Though it didn't stop FIFA from congratulating Romario on reaching his milestone, despite in the very same breath refusing to acknowledge at least 98 of the goals the Brazilian was including in his total.

Regardless of the precise numbers involved, the reverence, love and respect that Pele receives from football fans in Brazil and beyond is not up for debate. They call him "O Rei" ("The King"), and that's exactly how it will always stay. The man won three World Cups -- scoring 12 goals in 14 finals appearances -- with the Selecao, after all.

Pele scored what is considered by many to be the 1,000th goal of his career in 1969, at the age of just 29. It came from the penalty spot while playing for Santos against Vasco da Gama, in front of 80,000 feverishly expectant fans crammed inside the famous Maracana stadium in Rio de Janeiro. Discussing "O Milesimo" ("The Thousandth") in an interview with ESPN last year, Pele described the goal as a "gift from God" -- though he also admitted he'd have preferred the milestone strike to have been more spectacular.

"With all respect to the penalty, if I could choose, I'd rather it have come in a nicer way -- maybe from a volley or a beautiful header," he said. "That said, it's often much harder to score a penalty than a normal goal. I know what I went through. My legs were shaking. The whole Maracana was asking me to score and I thought 'Oh my god, I can't miss!' Many people say it was only a penalty, but for me it was the hardest goal."

As odd as it sounds, Pele wasn't actually Santos' usual penalty taker. Just imagine how many more goals he'd have scored during his career if he'd been taking pot shots from 12 yards, too.

It's apparent that we may never know for sure exactly when or if Cristiano Ronaldo will become the all-time top goal-scorer, or if he has done so already. The old records are so unreliable that it makes attempting to fully ratify historical goal tallies a largely fruitless task.

However, we can -- as modern day football fans -- at least place stock in the irrefutable fact that we are afforded the opportunity to watch one of greatest goal scorers of all-time play every single week.

That's a rare and precious honour, one we should cherish while we still can. Though the debate will stir up once again as soon as Ronaldo hits 768. Or 822. Or maybe even 1,284.