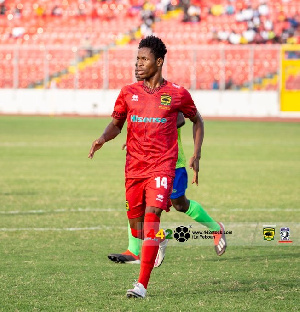 The youngster scored a late winner for the Porcupine Warriors to mark his return to full fitness after struggling in the 2021/22 season due to injury setbacks.

Isaac Oppong found space in the box and slotted home at the death to give Kotoko an important first leg win in CAF Champions League preliminary round.

In an interview with Sunyani-based Union FM, the former Ghana Premier League goal king expressed Isaac Oppong is a revelation and is of the view he can become a top player if he is managed well.

“If you look at the way he scores goals, with little space he just put a spin on the ball and that is it”

“Looking at the goals he scores; it takes strikers who are snipers to score such goals”

“Isaac Oppong is a revelation, a dream player for Asante Kotoko depending on how they manage him”

“It takes a player with a high game to be able to take decision within a restricted or limited space in a game, so I am proud of him, he’s a young chap”

“He should be focus so that he doesn't become complacent and will be able to deliver as and when he’s in the game” he said.