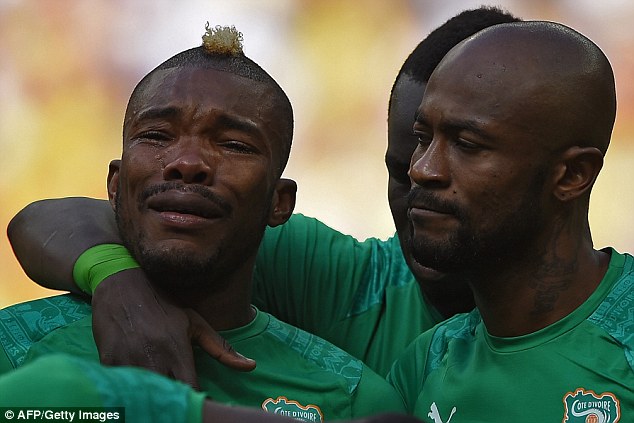 Veteran midfielder Serey Die says he is 'thankful' of the chance to play for Ivory Coast after retiring from international football.

The 34-year-old, who was capped 50 times, scored two goals in his six-year career.

He won the 2015 Africa Cup of Nations with the Elephants and played in the 2014 World Cup.

"I thank my predecessors who welcomed me by showing me the way to go, not to mention my younger brothers with whom I have continued the mission for a few years now," he said.

"Thank you for the respect you have always given me, but the time has come for me to leave you.

"God bless you and accompany you, I believe in you and I know that Ivory Coast will cheer you at each of your matches.

"To all lovers of football and especially those of my beloved homeland, I thank you for your support during this story and thank you for believing in me.

"I pray that God bless you all. And a big thank you to the federation (FIF) and especially president Sidy Diallo."

Die played in all three matches at the 2014 World Cup in Brazil and only missed one group game as the West Africans clinched their second continental title in 2015, scoring one of the penalties as Ivory Coast beat Ghana 9-8 in a shootout following a goalless draw.

As defending champions, he was captain when the Elephants exited the 2017 Nations Cup in the group stage.

And he featured in all five of Ivory Coast's games as they reached the quarter-finals of the 2019 tournament in Egypt.

Last week he joined Swiss club FC Aarau on a short-term deal until the end of December as he continues his career in Switzerland.

Apart from a year in Germany with Stuttgart, Die has been been playing in Swiss football since 2012 with Sion, Basel and Neuchatel Xamax.