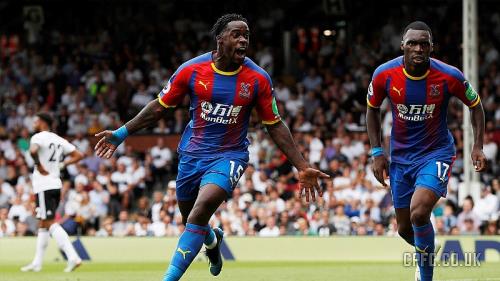 Some Crystal Palace fans have often questioned Roy Hodgson’s preference to select Jeffrey Schlupp over summer signing Max Meyer, with the former always seemingly preferred ahead of the German international to come off the bench to change the game, or come in and cover for an injured teammate.

This was the case yet again on Saturday against Fulham, as the 71-year-old Eagles boss opted for the Ghanaian over the more glamorous name in Meyer to replace the injured Cheikhou Kouyate, much to the frustration of fans on Twitter (see below) who felt the former Leicester man cost them three points against Southampton after his late cameo.

The match against the Cottagers was vital, as a win for Claudio Ranieri’s men would’ve taken them to just three points behind Palace, and dragged the south Londoners well into the relegation scrap.

Whilst the Selhurst Park faithful looked around, wondering who would step up and replace the suspended Wilfried Zaha’s mesmeric talents – and also casting an eye towards new signing Michy Batshuayi on the bench – it was Schlupp who took matters into his own hands.

The 26-year-old was hard working and industrious throughout and even provided an attacking threat for the Eagles in a game where his main task appeared to be just to replace Kouyate’s harrying presence in midfield. Schlupp had four shots at Sergio Rico’s goal, with one of them finding the back of the net after he cleverly followed in on Batshuayi’s parried effort. However, it was his defensive work that really caught the eye on a day where he seemed to be everywhere.

As per WhoScored, the former Leicester player made three interceptions, three tackles and one key pass as Palace recorded a vital 2-0 win over their London rivals.

Tellingly, his strike puts him on four Premier League goals for the season, one more than the main man Zaha – perhaps now, his inclusion in the team won’t be met with such outcry anymore.