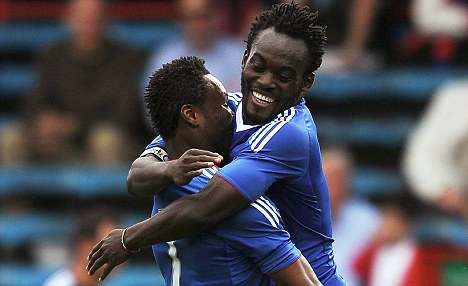 The 33-year-old made 249 Premier League appearances for Chelsea during his 11-year spell at the club, where he won the Champions League in 2012.

He also won two league titles, three FA Cups, and the Europa League in 2013 with the Blues.

Mikel Obi is currently without a club having left Turkish side Trabzonspor by mutual consent in March.

"Yes, there are interested clubs and England is a strong possibility and why not," Mikel told BBC Sport Africa.

"We are currently in talks with clubs and there is absolutely no hurry. I can only wait to see what happens."

He refused to confirm or deny media reports in England linking him with newly-promoted West Bromwich Albion and Championship side Stoke City.

The midfielder has previously played for Middlesbrough, Tianjin TEDA, and Trabzonspor.