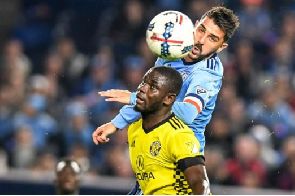 Ghana defender Jonathan Mensah recorded his first Major League Soccer goal of the season for his club side Columbus Crew in their game against New York Red Bull.

What became an eventful game for Mensah, he scored at both ends as the game ended 3-2 in favour of Crew.

He opened the scoring as early as the 7th minute before Crew added another one.

Patrick Mullins doubled the advantage in the 24th minute, racing onto a ball played into space by Harrison Afful before slotting low inside the far post for his first Crew SC goal.

Columbus made it 3-0 in the 31st minute when Sean Davis headed a Santos corner kick into his own goal at the near post.

Chris Armas made a double switch at halftime, bringing on Bradley Wright-Phillips and Kaku and the Red Bulls rallied to cut their deficit to one on a Mensah own goal and Danny Royer’s sixth of the season.