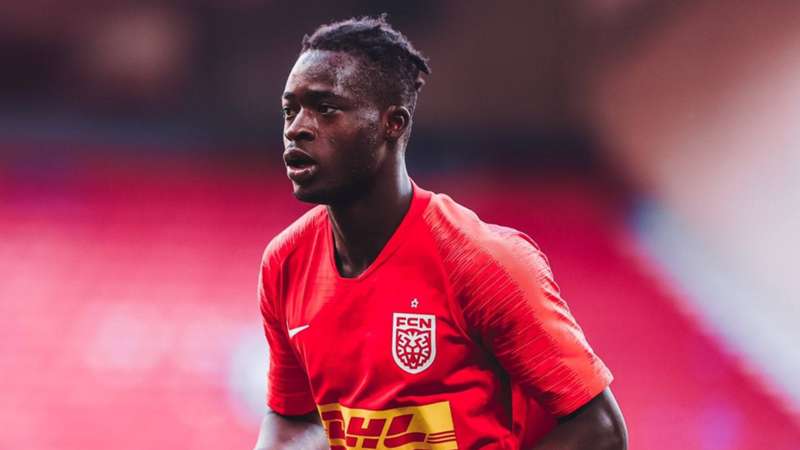 Kamaldeen Sulemana has been associated with Ajax for quite some time. The Ghanaian played for FC Nordsjaelland in Denmark last season and it seems almost a certainty that he will make a transfer. Whether he will follow his compatriot Mohammed Kudus to Amsterdam is, however, far from certain, as Manchester United also shows extensive interest in the quick attacker. To get a better picture of Denmark's Neymar, we speak with the chairman of the FC Nordsjaelland supporters club Lasse Poulsen.

As a fanatical supporter of FC Nordsjaelland, Lasse often spoke with Kamaldeen (the (first) name that adorns his shirt and also what he is called in Denmark). "Every disadvantage has its advantage," Lasse sharply notes, referring to the Danish club's relatively small fan base. “Everything here is very accessible.” Lasse's most recent meeting with Kamaldeen took place just hours after the last game of the season. "I was outside talking about the game with a friend when Kamaldeen came out. I asked him “And? Where are you going now?”, “Home!” he replied. Of course he wasn't going to tell me which club he's leaving for this summer, but his smile clearly showed that he did play his last game for our club."

A calm boy with a great sense of responsibility

Kamaldeen has a calm and humble personality. He is a nice boy to deal with and you can see in everything that he is very grateful for the opportunities he gets. I would describe his character in the field as a mood player. If his first action is successful, he then completely loses his opponent. But if an action fails, it visibly continues to haunt his head and he allows himself to be influenced by it," said the chairman of the Wild Tigers about the rough diamond of his club. "That is why I also believe that Ajax would be the best step for him, since they know how to help boys like Kamaldeen with their development. Most progress can be made for him in the mental area. If we are talking purely about talent, he is by far the greatest talent ever at FC Nordsjaelland. In some areas he has to make strides, but in other areas he is already world class.”

"He is very aware of his areas for improvement and of the responsibility he has in this, both on and off the field. He's the type of player with the X-factor, which allows him to decide matches. In addition, like other players who have come to Denmark from Right to Dream, he has a great sense of responsibility to his home environment. These guys often come from regions of Ghana where they are not very well off and they realize very well how unique the position they find themselves in. A lot is invested in them, and they feel it', explains Lasse Kamaldeen's grateful personality.

Dynamic play and explosiveness on the ball

“Our trainer Flemming Pedersen recently described him as the Neymar of the Danish league. It is now somewhat jokingly said about him in Denmark, but there are certainly similarities. The only difference is that Kamaldeen is not such a poser, haha," the Dane winks. "No, seriously, he is of course not yet comparable to Neymar in terms of level, but in terms of game technical characteristics they clearly have similarities."

"He is basically a left striker, but he is also used as a false striker. It's super fast and explosive, and no, not just in large spaces. His speed is particularly astonishing with the ball, defenders don't know how to stop him when he acts so fast, while the ball is sticking to his foot. He is not the type of winger who needs space to become dangerous', Lasse takes away the Amsterdam fear of a winger who does everything at speed.

"When I look at how opponents of Ajax often dig themselves in, he is an ideal winger for the team from Amsterdam. He is also good with both feet and is very unpredictable. He obviously has his favorite moves, and those are known to opponents, but he still manages to surprise them with the variety and the unerring execution. There is a lot of competition at the Amsterdam club, but it would be a good step for him. Ajax is the place to be for him. If Ajax helps him to take steps, they potentially (!) have one of the best players... Perhaps in the world.'

Development of Kamaldeen vs. Kudus

A year ago, when Kudus was signed by the team from Amsterdam, Ajax Showtime also looked ahead to the expectations we could have of the Ghanaian midfielder who preceded Kamaldeen. With today's knowledge, we can say that Lasse had a pretty accurate analysis.

When the fanatical Nordsjaelland supporter is asked how big he thinks the chance that Kamaldeen - knowing him - will move to Ajax, he sounds confident. "Very big, very big. If it is up to him, Ajax has the best papers, I think. He is very aware of the steps he still has to take and he also approaches it very seriously, I think Ajax has an edge over other clubs in that regard. It's a wise boy. And of course he already has a buddy in Amsterdam.”

Yet the Dane also has a hand in his hand. "That's just what I personally think, so don't tie me to it. I think Manchester United are now mainly being used to drive up the price, both for FC Nordsjaelland and in terms of the terms of Kamaldeen's contract itself. But of course Ajax has also been financially decisive in recent years, so I can see him leaving for Amsterdam.'