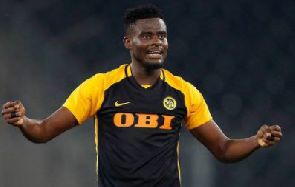 Ghana defender Kassim Nuhu says he one day want to play in the English Premier League.

The Swedish based Ghanaian has put clubs in England on red alert.

He has been phenomenal for BSC Young Boys this season and for him he will welcome a move to England in future.

“Every footballer has aspirations. I had a great season in 2017 from the club side to the national team and I expect a better season in 2018.

“I dream of playing in the Bundesliga or the Premiership so I have to work harder in 2018 to make my dream a reality,” he told GHANAsoccernet.com

“I have been in Spain and have tasted their football but I want to play in the two leagues for a new experience,” he added.