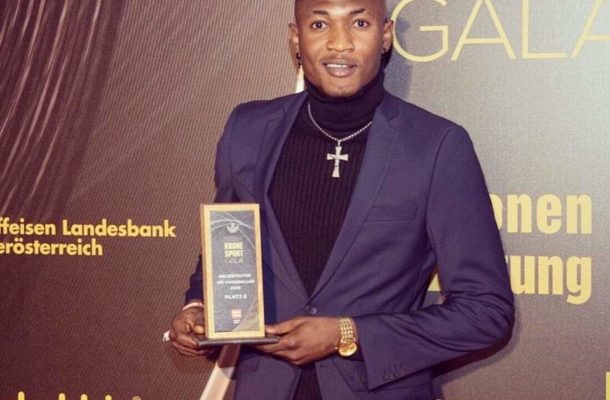 Ghanaian youngster Kennedy Boateng has emerged as the second-best player in Upper Austria at the 2019 Krone Sports Gala in Linz.

The 22-year-old-defender plays his club football for SV Ried and has been outstanding since the start of the 2019/2020 season.

At the end of the Kickerwahl Krone awards Gala, Tetteh has been named as the second-best footballer in the Linz region.

The award is given to players in the Linz Region plying their trade in the top-flight and second-tier.

He was beaten to the first prize by the captain of LASK Linz Gernot Trauner.

Kennedy Boateng, formerly of WAFA managed to pull 83,507 votes and clinched the second prize with his head held up high.

The Ghanaian takes great motivation from the award and will surely be boosted to keep performing at the top level.

The defender currently has a goal to his name after 11 appearances and has helped his SV Reid side to the summit of the standings in the Austria 2.Liga.