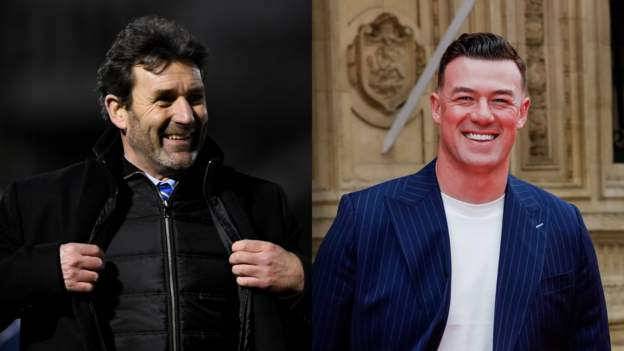 By reaching round two of the FA Cup, King's Lynn Town have already gone one better than Kai Widdrington.

Kai and partner Kaye Adams were the first couple eliminated from this year's Strictly Come Dancing - but the Linnets have the chance to progress further in their competition when they take on Stevenage in front of a live BBC TV audience on Saturday.

It's very much a family occasion for the Widdringtons, as Kai's dad Tommy is the National League North team's manager and brother Theo plays in midfield.

And he is desperate to be at The Walks to support the team, even though he has to be at the Strictly studio 105 miles away later in the day.

"I hope I can be there even if it's just for the first half and then have to leave for Strictly, which will probably be even more torture because I'll have to watch it in the car on the way there," he told BBC Look East.

"They're right up for it. They're flying in the league and there's great momentum with the boys.

"I'm a fan, I'm willing them on - I've heard there's going to be over 3,500 there and when my dad joined the club there were only 500, so it just shows what a good run, really getting the players together and getting that camaraderie can do."

It's been a bit of a rollercoaster ride for King's Lynn in the last few weeks - which is perhaps not a surprise as defender Aaron Jones is also a director of the Pleasure Beach at Great Yarmouth.

In the first round, they won 1-0 at Doncaster Rovers, who, like Stevenage, play in League Two, and they are second in the league with seven wins and a draw from their eight games so far.

But last weekend they were eliminated from the FA Trophy in round two, conceding a stoppage-time equaliser scored by Hemel Hampstead Town goalkeeper Craig King and then losing on penalties.

"On Monday we came in - it's normally a light recovery session but we trained at a decent intensity. I think the lads wanted to get that disappointment out of their system as quickly as possible," Jones told BBC Radio Norfolk.

"We've had a really good week of prep and everybody feels ready to attack the weekend. It's an amazing opportunity. How often at this level do you get to play not only on national telly, but international telly as well?

"I saw a tweet or Instagram post from the official King's Lynn account saying we're broadcast at this time in Beijing, at this time in Perth, and it just makes you realise the exposure we're getting.

"Unless you were part of the 600-odd Lynn fans that went to Doncaster, nobody got to see it, but we're now going to be in front of a huge audience."

It is only the second time that King's Lynn have reached the second round. They did so two seasons ago, winning 1-0 at Port Vale before losing 6-1 to 2008 winners Portsmouth.

Opponents Stevenage could have lost their English Football League status in 2020, when they were only saved from relegation at the end of a Covid-affected campaign by Macclesfield Town being deducted 17 points.

They finished 14th and 21st in the past two seasons, but now, with the vastly experienced former Rotherham, Leeds, Peterborough and Gillingham, manager Steve Evans in charge, they are second behind Leyton Orient in League Two and in a great position to push for promotion.

They also have recent cup pedigree, beating Hull City, then leaders of League One, via a penalty shoot-out to reach round three and set up a meeting with Swansea City, which ended in a 2-0 defeat.

Jones expects them to be "a very different proposition" to Danny Schofield's Doncaster.

"They (Doncaster) were very much play out from the back at all costs. We managed to turn over the ball quite a lot in their defensive third, our attacking third, which then led to the chances we created," said the 28-year-old, who joined King's Lynn in 2018 after several years playing in the United States.

"I think we had 14, 15 shots in that game compared to their four or five. The stats reflected the result and I think people who were at the game would agree the scoreline could have been a lot more comfortable."

Jones continued: "In terms of Stevenage, what we've seen of them so far, we know they're quite direct, we know that they are physically imposing, so our game plan will reflect that.

"I don't think there's been a game (this season) where we've lost through lack of effort. There's a good culture in the dressing room and it's driven by good people and good leaders who've been around the game for a long time.

"It's a big stage but there's people who have been on big stages before in our dressing room and we'll go in there and give it our best shot."

Widdrington isn't the only famous name in the King's Lynn dressing room. Full-back Christian Oxlade-Chamberlain is the brother of Liverpool and England midfielder Alex.

But forwards Gold Omotayo - the match-winner against Doncaster - Ken Charles and Josh Barrett could be the key men as they look to see off Stevenage.

Barrett, 24, began his career at Reading, making his first EFL start in a Championship game at Blackburn Rovers in May 2016.

He played in three FA Cup ties during loan spells at Coventry City and Aldershot and has scored 12 goals for King's Lynn since joining them from Bristol Rovers in October 2021.

"Josh is a special talent. Some of the things he does in training are ridiculous," said Jones.

"We were playing some small-sided games the other day and someone clipped the ball over, someone tried to head it but missed it and Josh just spanked it on the volley straight in the top corner. That's what he's capable of.

"He's played at Reading in the Championship, been on big money, but for one reason or another he's now with us and we're so grateful to have him. We'll try and get him on the ball as much as possible and let him do what he does best, which is excite fans."

Tommy Widdrington has known some big occasions - he played for Southampton in the Premier League in the 1990s - and is relishing to chance to pit his wits against Evans.

"Steve (Evans) and I know each other from a long time ago. We've been adversaries at the side of pitches, we've done business together as managers, moving players between ourselves," the 51-year-old said.

"He's had a hell of a football career. We'll probably have a competition to see who is louder than the other because that will be a good scrap.

"He's done a fantastic job since he's gone in at Stevenage. He's got his stamp on that club very quickly."

Widdrington "eats, sleeps and breathes football" according to son Kai who, in another life, might have been out there on the pitch for him, but he chose the ballroom over the boot room after flirting with a career in football.

Doing the same may be beyond King's Lynn's capabilities, but they want to prolong their FA Cup dance as long as possible

"They've proven themselves. They did it against a League Two side in the last round and there's no reason they can't do it again," said Kai.

"It's going to be nail-biting."

Watch all of the latest FA Cup highlights and reaction here