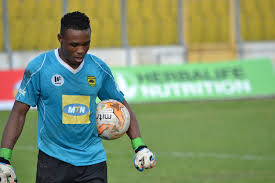 Asante Kotoko goalkeeper Ernest Sowah has returned to training after recovering from an ankle injury which was feared to rule him out of the first round of the ongoing Ghana Premier League.

The former Berekum Chelsea goalkeeper is available for selection in Kotoko's MTN FA Cup Round of 64 match against Bekwai Youth Academy on Sunday.

"He is now good to play" said Gabriel Ofori Adjei – member of the Medical Team. "We said in the beginning that, he could have a quick recovery. He has had just that. He’s now fully fit. We’ve assessed him repeatedly and can attest to that".

Sowah, aggravated an ankle injury before the match day 8 clash against Hearts in Accra last month. The Medical Team, after assessing him, said he would be out of the first round of the 2016/17 Premier League. They however left a room for a quick comeback.

Late Thursday, hours after training, the medics disclosed that their assessment revealed that, he’s made an excellent recovery. The goalie has been active at training; occasionally involved in insurance training – activities aimed at detecting the levels of the recovery and intensifying it.

He has passed the assessment with distinction and has since been involved in team activities. This news comes at a good time particularly after reports that number one goalie, Felix Annan is down with a shoulder injury.