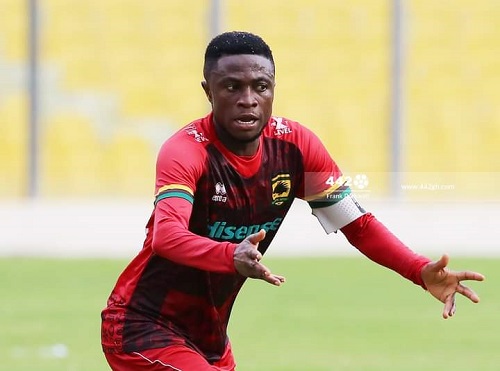 The management of Asante Kotoko will summon Emmanuel Gyamfi following the fiasco in Sudan.

The midfielder is said to have led the Kotoko players to threatened to boycott their Caf Champions League game Al Hilal due to their unpaid entitlements.

Kotoko were demoted to the Caf Confederations Cup after several players and officials tested positive for Covid-19.

Management of the Porcupine Warriors will be questioning the 24-year old attacker for multiple violations of the club's rules and regulations.

Significantly, Gyamfo was spotted with Strike trolley bag for their trip to Sudan and not that of Errea their kit sponsors.

However, acting communications manager, David Obeng Nyarko in an interview failed to confirm or deny but said there are internal issues which will be dealt with.

"There are issues that will be dealt with internally, we have won yesterday and we don't have to take the shine out of the victory," he told Oyerepa FM.