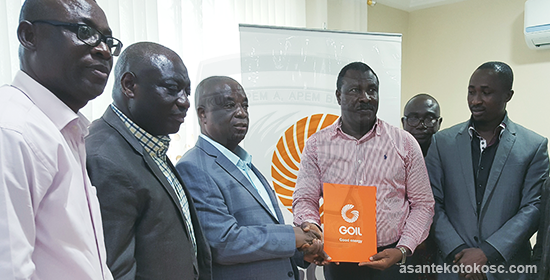 The Ghana Oil Company Limited (Goil) has renewed its corporate partnership with Asante Kotoko for the next two years.

Contract papers were signed in Accra on Wednesday to extend the relationship between the two respected institutions.

The Group Chief Executive Officer and Managing Director of Goil, Patrick A. K. Akorli, before the signing, stated the oil company’s commitment to football development in Ghana. He encouraged Kotoko’s Management to work harder to sustain the success of the club.

Accra Representative and Premier League Board (PLB) member, Thomas Boakye Agyeman, who signed on behalf of Executive Chairman, Dr. Kwame Kyei, expressed Kotoko’s gratitude to Goil. He gave the assurance that, the club would use its brand to promote the services and image of the oil company.

As part of the contract, Goil, among other things will give Kotoko GH40,000 monthly and an enhanced package of GH5,000 for publicity. The sponsorship money is to cater for the general welfare of registered players – for example in supporting salary and allowances.

Kotoko, on the other hand, will promote the services and reputation of Goil as enshrined in a nine-point statement in the two-year contract. Both parties pledged to live up to expectation as done previously.

In April 2016, the Opoku Nti-led Management of Kotoko signed a one-year agreement with Goil which ended this year. Goil and the current Kotoko administration recently entered new discussions which led to the renewal of the partnership for two years.