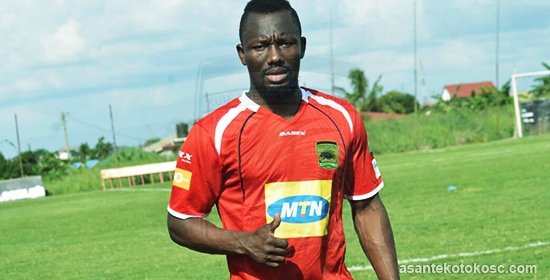 Kumasi Asante Kotoko striker Saddick Adams is hopeful the Porcupine Warriors will beat Medeama SC this weekend in the Match Day 21 of the Ghana Premier League.

The Ghanaian giants are beaming with confidence following back to back victories against Wa All Stars and Ebusua Dwarfs in the Premier League.

The former Berekum Chelsea strike who score an exquisite penalty to win the Porcupine warriors the President Cup believes the game against the Mauves and Yellows won’t be easy but was hopeful of picking all three points.

“It is not going to be easy, is going to be a tough game, yes we won against Hearts of Oak in the President Cup but that is over, the celebration is over,” he said.

“We are now focusing on our game against Medeama, I know they will be coming into the game very strong but I am very sure we will pick the three points on Sunday.”

The reds lost in the first round to the same opponents at the T&A park by 2 goals to one.

Kotoko are fourth on the Ghana Premier League table and have a chance of fighting for the league with ten games to go and are just eight points adrift of leaders WAFA.