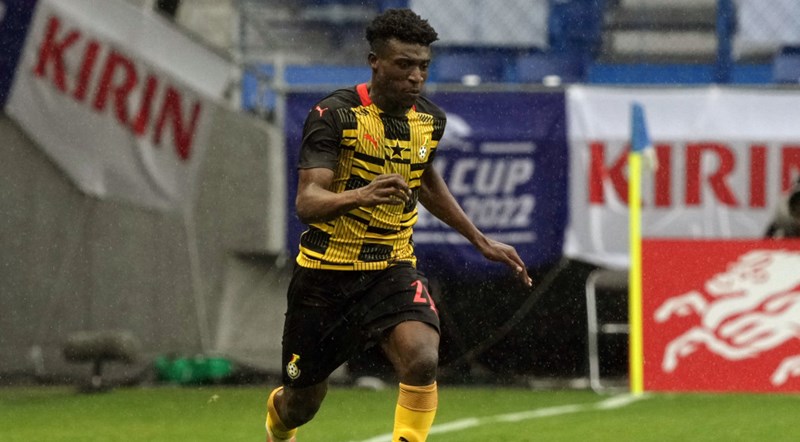 If Kudus Mohammed is feeling it, he is doing a damn good job of masking it. The standout African player in the Uefa Champions League last week, the Ghanaian seems to be on a mission to prove a point – but how far can he go?

This weekend, his goal in the Eredivisie grew his reputation as a goal-scorer in a two-week blitz that has astounded even his most optimistic fans.

Last Tuesday, his scorching goal for Ajax against Liverpool left Rio Ferdinand gushing – “no keeper in the world saves that” – and Jurgen Klopp describing it as “incredible.” Thierry Henry says the lad is “a dream”, and former Everton/DR Congo star Yannick Bolasie has been raving about the midfielder on Twitter for two weeks.

A week before that, on September 7, Kudus became the first Ghanaian to score and assist in a Champions League game since 2011, when Andre Ayew did so for Marseille against Dortmund.

All this has come on the back of a period of tension between him and Ajax, when he attempted to force a move to Everton in the last few days of the recent transfer window.

Kudus wanted out because he wasn’t getting enough playing time. The club refused to let him go, and have since thrust him upfront – which is not his preferred position. No problem, as the 22-year-old has responded with six goals in five games.

His response when asked about his superb form? “I’m still learning, and I think I can do better.”

There is a photo on the internet showing Kudus, about 9 or 10 years at the time, in a Chelsea shirt squatting on a dusty pitch in Accra, Ghana’s capital. Unlike many typical African football star stories, he did not grow up poor.

“We were not rich either, we were just OK. I don’t remember lacking food or somewhere to sleep, but I remember my mother and grandmother worked very hard to make this happen,” Kudus said in 2020.

“The bigger the game, the easier he expresses himself,” Masud Didi Dramani, one of Ghana’s national team assistant coaches, tells SuperSport. He worked with Kudus at RtD, and then at Nordsjaelland in Denmark, where the player featured for two years before joining Ajax. “There are lots of talented players on the streets of Nima where Kudus comes from, but you won’t find many with his big game temperament.”

There’s a story of Nordsjaelland playing Liverpool in a U23 game in August 2017, and Kudus – not cowed by the more established names in that English team like Curtis Jones, Rhian Brewster and Neco Willams – stood out and scored in a dominant 4-2 win.

“It is that same character he’s brought into the Black Stars,” chimes in Chris Hughton, technical advisor of the Ghana team going to Qatar. “For someone of his talent, he has absolutely zero airs. He lets his game speak.”

So far, Kudus’ talent has spoken very loudly – in fact, so loudly that he may have created a problem for his coaches at both club and national level.

At Strong Tower, Kudus played all across midfield as he found his feet. At RtD, same story. It was in Denmark that his role behind the striker was really explored, which got him the 14 goals in 57 games that attracted Ajax.

“The primary reason he was brought to Amsterdam was to be a creative engine,” Juan, a podcaster for We Are Ajax told Joy News Ghana recently. “As we have found out, he scores goals too.”

Indeed, his accurate shooting is evident, but what stands out are his explosive transitions, ability to draw opposition to himself, and make way for others. Which is why his thriving role as lead striker at Ajax has taken everyone by surprise. Kudus, after trying to force a move to England, needed to be compensated with regular games. But there was a problem.

In the position Kudus thrives in, Ajax have Kenneth Taylor and Steven Berghuis, who are something of untouchables at the moment. This prompted team coach Alfred Schreuder to chuck Kudus upfront – and the player has responded with seven goals and one assist in 10 games. For context, he had six goals and one assist the whole of last season. Can he can be relied on as a pure striker.

Schreuder is aware of the situation, saying on Thursday: “I did say to [Kudus]: don’t start thinking: oh dear, the trainer no longer sees me as a midfielder. It is not like that. But I am charmed by him in the front. You try something like that because you think it’s possible.”

Clearly, Schreuder believes in Kudus’ ability to exceed expectations. He is not the only one.

All this buzz is coming only two months to the World Cup. With no other Ghanaian player operating at such a high level in a big club now, Kudus has to expect the sight of his face representing his country in World Cup previews and montages, alongside captain Andre Ayew and Arsenal’s Thomas Partey.

Remember what has been said about the lad and pressure? “We were not surprised when he scored on his national team debut. He’s got the attitude for such games,” Charles Akonnor, immediate past coach

of the Black Stars (and was assistant when Kudus got his senior team debut against South Africa in November 2019), tells SuperSport.

That Afcon qualifier performance marked the player as a shoo-in to start when fit. And yet, it’s got to be asked if his young shoulders can carry the weight of an expectant nation.

Akonnor says “Ghanaians should allow the boy to grow at his own pace”, while Hughton believes “Kudus’ time to carry the team will come, but probably not yet” and Dramani reckons that “as talented as the boy is, the expectations of Ghanaians at the moment can be a very heavy burden.”

This Friday, September 23, Ghana play Brazil in a pre-World Cup friendly, following it with another against Nicaragua four days later. Imagine if Kudus replicated this crazy form in both games.

There will be no stopping the hype machine from Ghana – and Kudus will simply have to learn to deal with it.