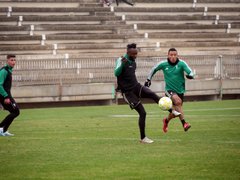 Ghanaian forward Kwabena Owusu joined his Cordoba CF teammates to train this evening after returning from international duties where he represented his national team at the CAF U-23 Africa Cup of Nations (AFCON) tournament hosted in Egypt.

The attacker was part of the Black Meteors team that played at the U-23 AFCON seeking for glory as well as qualification to the 2020 Tokyo Olympic Games.

At the end of a tournament where the team failed to achieve its goal, Owusu has returned to Cordoba CF where he is spending the 2019/2020 season on loan.

He was present at training this evening and looked sharp as well. The club’s leading top scorer is now in contention to feature for the side in their match against Don Benito in the Spanish Segunda B.

That crucial away match will be played on Sunday, December 1, 2019.