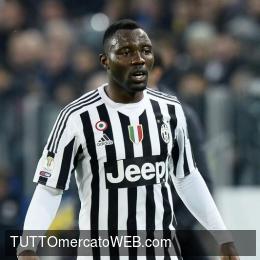 Ghana midfielder Kwadwo Asamoah says the signing of Cristiano Ronaldo by Juventus is a good one.

Ronaldo,33, joined the Old Lady's on Monday after sealing a €112 million, putting him in the bracket of the four most expensive players of all time.

A lot of reactions have come through since the announcement of the move  and Kwadwo Asamoah, former player of Juventus thinks is an awesome move.

"Cristiano Ronaldo moving to Juventus is a very good move," he said.

"Ronaldo will make the Italian league more interesting and a lot of people will now be interested in the Serie A because Cristiano Ronaldo would be playing, he has a big brand."

"I believe Cristiano Ronaldo wants to have a feel of the Italian league that's why he moved here."

"Serie A is a difficult league to play in. I don't think he will find it easy playing here but I believe he knows why he made the decision to come here so he is ready for it."