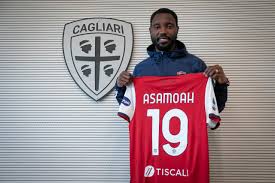 Kwadwo Asamoah could already have a chance against Atalanta on Sunday due to the less than perfect conditions of defender Lykogiannis.

The former Juventus player will not yet be at 100%, but he is physically ready to take the field, and on Sunday against Atalanta, he will play a starting role at left-back. Tonight there will be an update on Lykogiannis’s condition, struggling with a knee contusion that forced him to leave early on Sunday.

In the event that the Greek does not recover, the ballot will be between Asamoah and the young Tripaldelli, a growing player on whom the coach is still betting.

At this moment, however, Di Francesco has already made it clear that he needs experience and Kwadwo Asamoah may be the right choice also in view of a change of set-up during the match in progress.

Asamoah is in fact able to play both as a winger and as a midfielder, up to the point where he can also play the role of playmaker in front of the defense.