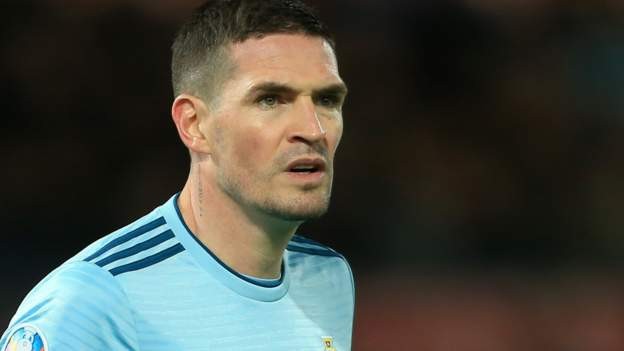 Kyle Lafferty has been withdrawn from Northern Ireland's Nations League squad amid an investigation by his club into an alleged sectarian remark.

On Thursday, Kilmarnock said they were aware of footage "which appears to show a member of our playing staff using language of a sectarian nature".

The Irish FA said on Friday that it "notes an investigation has been launched into the video" by the club.

It said a "minor back problem" had also prevented Lafferty training this week.

On Thursday, the Scottish Premiership club said it found "all forms of discriminatory behaviour completely unacceptable".

The Northern Ireland striker, 35, is in his second spell at Kilmarnock.

The Fermanagh man joined the club in February 2021 and scored 13 goals in as many appearances before signing for Cypriot side Anorthosis Famagusta.

However, he returned to the Scottish club in January.

Lafferty has earned 89 Northern Ireland caps since making his debut in 2006 and has scored 20 goals for his country.

Northern Ireland will aim for their first ever win in the Nations League when they host Kosovo in Belfast on Saturday evening and then face Greece in Athens on Tuesday.