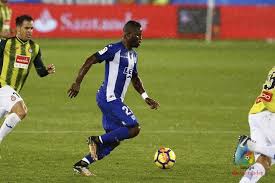 Ghanaians football fans will have to keep keen eyes on LaLiga this season, as a host of Black Stars have made the Spanish top flight their home for the 2018/2019 season kicking off this weekend.

With the recent acquisition of Ghana striker,Raphael Dwamena on a four-year deal, by LaLiga side Levante UD, the crop of Ghanaian talent in LaLiga this season has risen to 6!

22-year-old Dwamena made the switch from FC Zurich to Levante, after just a season and a half with the Swiss Super League club.

He joins his International teammate Emmanuel Boateng at Levante UD. Another Ghana International,Patrick Twumasi has also joined fellow compatriot, Mubarak Wakaso at Deportivo Alaves; while (and probably the most notable of them all) Thomas Partey is a key figure on the books of LaLiga giants and current UEFA Super Cup champions, Atletico de Madrid.

Dwamena scored 28 goals, and provided 18 assists in a total 56 games for FC Zurich, and has expressed his gratitude for their support of him during his time at the club. His signing comes in timely fashion for Levante, just a day after the Frogs sealed a deal to bring Nigerian International Moses Simon to the Ciudad de Valencia.

Another new recruit with Ghanaian heritage is midfielder Emmanuel Lomotey, who joined LaLiga giants Villarreal on Tuesday. The 20-year-old arrived in the Spanish city on a season-long loan deal on Tuesday morning, to begin work with his new club. Lomotey played for Ghana Premier League club Dreams FC prior to his move to Extremadura in the Spanish lower division last season.

With a whole host of Ghanaian stars plying their trade in LaLiga, it is safe to say Ghanaian fans will have high hopes for the development of their beloved national team in years to come. With the African Cup of Nations coming up, Ghanaian fans will be hoping their international stars carry the skillsets they’ve gained from playing in the best league in the world with the best players, and turn it into silverware for their beloved country.