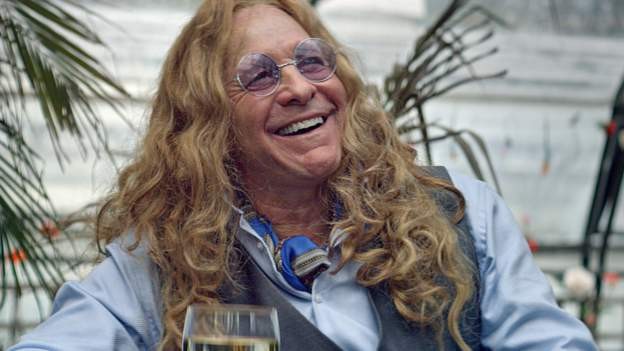 Guttenberg, whose new film Original Gangster came out this week, admits he is not much of a football expert - the last time he went to a game, Lawro was still playing.

"It was around 1987, when I was in the UK and Ireland filming High Spirits," Guttenberg told BBC Sport. "My co-star Peter O'Toole was a big rugby fan and loved the Irish teams but he took me to a bunch of soccer games too.

"I'm more of a baseball fan really but I did play soccer in High School. I was third-string goalkeeper - I don't think I was that good, but I had a great time."

Guttenberg sports an amazing wig in his new film Original Gangster - "I was channelling Gary Oldman in True Romance there."

Guttenberg has not played any football for a while, but he does have some experience of life in a dug-out.

He played a Texas sheriff turned football coach in 1995 Disney film The Big Green, which saw a female teacher on an exchange from England turn around the fortunes of an underachieving school team, with his assistance.

"That was a GREAT soccer movie," Guttenberg added. "I'd be quite tempted to do some coaching in real life too - I'm hoping to be hired by Manchester United. You never know."

Guttenberg (left) shot to fame in Police Academy, and played Carey Mahoney in the first four films of the famous franchise. He has promised to take Lawro out for a pint the next time he is in the UK

Guttenberg says he does not support any particular Premier League side but for various reasons, he is hoping Liverpool, Everton and Crystal Palace win this weekend.

"I love Liverpool as a city and I've been there many times," he explained.

"Not only that, I have a bit of history there - my grandfather escaped the Russian pogroms on horseback after the Bolshevik Revolution and made it all the way to Liverpool.

"He lived there for five or six years before he got on a boat to come over to the United States."

In contrast, his affinity for Palace is not something that has been passed down the generations - instead it is down to his stint in panto in Bromley in 2008, when he took the role of Baron Hardup in Cinderella, on the advice of the Fonz - his friend Henry Winkler, who was playing Captain Hook in Peter Pan in Wimbledon.

"I didn't get to watch Crystal Palace play," Guttenberg added. "But I was staying near Buckingham Palace, so I got to see that a lot."

A correct result (picking a win, draw or defeat) is worth 10 points. The exact score earns 40 points.

Last week felt like a real kick in the teeth for Fulham, who collapsed in the final few minutes against Aston Villa to turn what would have been a big win for them into a damaging defeat.

This is another chance for them to climb out of the bottom three, against a team who have not won for a while, but I just wonder how much that capitulation will have deflated them.

Wolves have not won for five games, since they beat Leeds on 19 February, but I don't think they are playing as badly as their results suggest.

Steve's prediction: I'm going for the Wolves. I love Wolves. 2-3

Leeds gave Manchester City a really good game at Elland Road in October, but Pep Guardiola's side look like a totally different team these days.

I know Leeds will be adventurous, but I just don't see them having very much of the ball.

Guardiola can afford to rest whoever he wants to rest before his side go to Borussia Dortmund for the second leg of their Champions League quarter-final next Wednesday, and I don't think it will make much difference.

Steve's prediction: I'm giving Leeds a goal, but that's all they are getting. 3-1

When these sides met earlier in the season it was the first sign that things were not all going to go Liverpool's way this time.

The Reds started the game at Villa Park with their first-choice central-defensive pairing of Virgil van Dijk and Joe Gomez, but still lost 7-2.

It was a day to forget for Jurgen Klopp's side but, if you'd told me then what would happen to their home form this season, I wouldn't have believed you.

Liverpool can no longer catch Premier League leaders Manchester City, who have 74 points, so the defence of their title ended last weekend. Their target now is to finish in the top four

So, it would be huge for Jurgen Klopp's side if they can take the three points at Anfield on Saturday - something they haven't done in any of their past eight games there, since 16 December.

A home win would get that monkey off their back ahead of the visit of Real Madrid in the second leg of their Champions League quarter-final on Wednesday, but it is far more important in terms of keeping them in touch with the top four.

Chelsea were on the wrong end of a stunning 5-2 scoreline against West Brom last weekend, but they bounced back well against Porto in midweek.

Crystal Palace underlined how solid they are with their draw against Everton on Monday, and they are no pushovers. Chelsea are going to have to work hard for everything they get here.

A win would be a massive boost for Newcastle in their relegation battle. Similarly for Burnley, a victory for them would as good as put them safe.

The Magpies were decent in their draw with Tottenham last weekend and I think they will build on that by getting something here. I just don't see Burnley being beaten though.

Steve's prediction: I've never had a night out in Burnley, but I had a great time when I went to Newcastle so, on that basis, I'm going with them to win. 0-2

Even without the injured Declan Rice, West Ham were impressive against Wolves on Monday evening, but this is a much bigger test for them.

Leicester were outplayed by Manchester City last time out, but I don't think you can really read too much into that - Brendan Rodgers' team are still a very good side.

West Ham have shown they are too, and they have done brilliantly to get in the top four, just one place below the Foxes.

It is going to be hard for both of them to stay there, but of the two I think Leicester have got the better chance. They blew up from a similar position last season, but this time they have got a better team and a better squad.

Steve's prediction: I love the story of how Leicester won the league as huge underdogs in 2016. The fact their nickname is the Foxes seals the deal. 1-2

When Tottenham beat Manchester United 6-1 at Old Trafford on 4 October, it wasn't even the craziest result of the day - that was Villa's 7-2 win over Liverpool.

I'm not expecting the same kind of scoreline this time - since that game, United have really tightened up against other teams in the top six - but I'm still going for another Spurs win.

A draw is not much good to Jose Mourinho's side after they dropped points against Newcastle last week, and we might just see a reaction to his comments about their poor defensive display at St James' Park.

For a while now it has been just a question of when Sheffield United are going to be relegated, not 'if'.

The Blades beat Arsenal in this fixture last season, but it is hard to make a case for a repeat result this time, even knowing how bad the Gunners can be.

Mikel Arteta's side were extremely poor in their 3-0 defeat by Liverpool last weekend, but they are so up and down at the moment that it doesn't mean they will be the same again - in this case, that is a good thing.

Both of these had excellent wins last time out, and in Southampton's case their comeback victory over Burnley means they have 36 points - which should keep them up.

West Brom's 5-2 success at Chelsea was absolutely stunning and everything about their display was excellent, but their prospects look very different - for me, they have left themselves too much to do to get out of trouble.

Brighton played really well at Old Trafford for long periods but still somehow ended up empty-handed - the second time that has happened to them this season against Manchester United.

The Seagulls are still six points above the relegation zone, but they should really have a lot more breathing space on the back of their recent performances.

This is another big test for them, because Everton appear a totally different proposition on the road compared to at Goodison Park, where they keep on dropping points.

Even a draw would be a good result for Brighton in their current situation, but they really need to get something out of this one whether they play well or not.

Lawro and Steve were speaking to BBC Sport's Chris Bevan.

How did Lawro do last time?

Last weekend, Lawro got five correct results from 10 matches, including two exact scores, for a total of 110 points.

He beat singer-songwriter David Gray, who also got five correct results, but with no exact scores, giving him a total of 50 points.