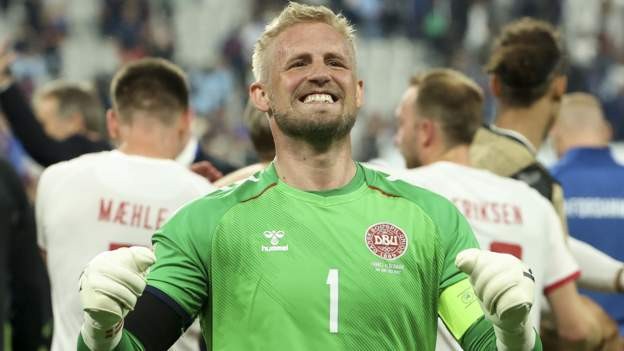 Kasper Schmeichel made 479 appearances in all competitions for Leicester City

Leicester City captain Kasper Schmeichel is set to sign for Ligue 1 side Nice after undergoing a medical this week.

The goalkeeper, 35, has been at the Foxes since 2011, winning the Premier League, FA Cup and Community Shield.

Schmeichel was also part of the side that won the Championship in 2013-14.

He follows Aaron Ramsey to Nice after the Welshman, 31, also joined the French club following the termination of his contract at Juventus.

Schmeichel, capped 84 times by Denmark, had been given permission to leave Leicester and was not involved in their pre-season friendly against Sevilla on Sunday.

Leicester are the only club in Europe's top five leagues not to have signed a player this summer - and manager Brendan Rodgers admitted they had to manage their finances carefully.