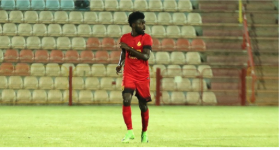 Owusu was impressive in the game which they drew goalless on Sunday.

He was making his first competitive start for the Dolphins and drew applauds from all the fans at the Yud-Alef Stadium as he showed pure class and quality.

The former Dreams FC player is expected to play a key role for Ashdod when the Israeli Premier League begins.