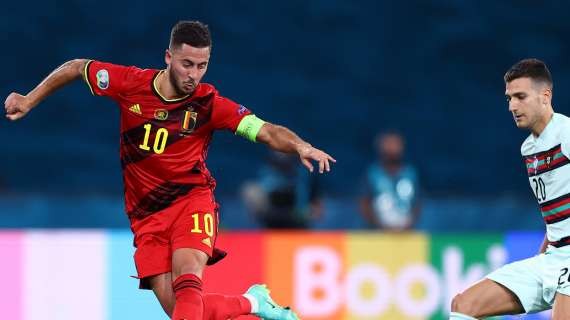 Coming from two mostly underwhelming Real Madrid campaigns, above all out of injuries occuring him, 30-year old Belgian international winger Eden Hazard, according to AS, has been tendered on a move-out scenario, to no other club than Chelsea, the very one providing him the right spot, throughout a seven year-long course (from 2012 to 2019), to get under the limelight as one of the best football players worldwide.

Purchased on a 115 million euros transfer fee two years ago, Hazard is still on a deal with Merengues until June 2024, and, while Carlo Ancelotti might end up recovering him as a high-rank regular, as well as an integral cog for the team, his farewell to Santiago Bernabeu, according to most, is long overdue. Chelsea, however, are hardly going to welcome him back in, since they are already overflowing with wingers, wide forwards, attacking midfielders and second strikers all of sorts, filling up a list which includes Hakim Ziyech, Christian Pulisic, Kai Havertz, Mason Mount, besides vying for Kingsley Coman (with Callum Hudson-Odoi possibly on his way out).

Besides, Lille alumni is the highest-paid Real Madrid player at the time, with a more than handsomely rewarding annual salary, adding up to the mindblowing amount of 25 million euros. While having barely scored five goals throughout two seasons into Blancos ranks, capping 43 times overall, Hazard collected 602 caps and 166 goals scored across his whole club career, with 111 caps and 32 goals scored for Belgium on top of that. Though never managing to win Champions League so far, the 1991-born football star won four national titles (two for Chelsea, one for Real Madrid, one for Lille), two Europa League editions, as well as ranking eighth for Ballon d'Or twice, back in 2015 and 2018.