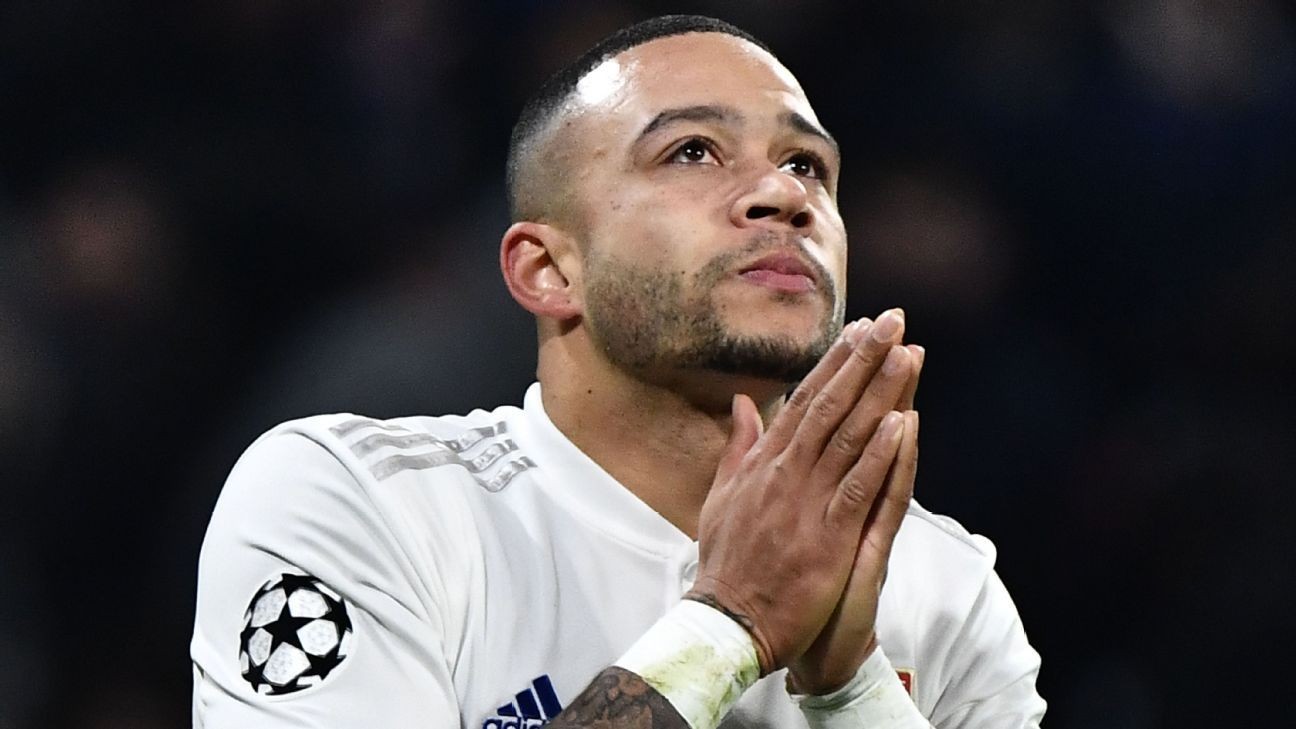 Barcelona are trying to rebuild their squad, even if the future of their star player Lionel Messi is still up in the air.

With a new Dutch coach, Ronald Koeman, in at Camp Nou, the club have targeted a host of Dutch players and newspaper Algemeen Dagblad says they have agreed terms with Lyon winger Memphis Depay.

Depay, 26, has one year left on his contract and told NOS earlier this week that "I never said I want to leave ... I feel good about myself but also have my dreams. I have always expressed that too." Lyon reached the semifinals of the Champions League last season but missed out on Europe after only securing a seventh-place finish in Ligue 1, and talk of a €40m move for Depay has increased,

Elsewhere, Koeman has insisted that Barcelona sign Georginio Wijnaldum, sources have told ESPN's Alex Kirkland and Moises Llorens, and wants the club to do whatever it takes to land the Liverpool midfielder.

09.32 BST: Chelsea midfielder N'Golo Kante has been linked with a move away. WHY?

Gab Marcotti outlines the impact N'Golo Kante has on the pitch for Chelsea and explains why he could be up for sale.

09.00 BST: ESPN's Insider Notebook is live and there's plenty of transfer news to follow, including:

- Real Madrid are considering a second round of temporary wage cuts for players as the club assesses the long-term financial impact of the coronavirus pandemic, sources have told ESPN's Alex Kirkland and Rodrigo Faez.

- Atletico Madrid are yet to receive an offer for Arsenal target Thomas Partey, sources told ESPN, with PSG now in the running to land the midfielder.

08.26 BST: It's been a whirlwind couple of weeks in the European soccer universe, with teams attempting to cram a full offseason's worth of both transfers and transfer rumors into the shortest offseason ever. But as moves have become official, they have created a few particularly interesting position battles among the top teams on the continent.

Here are a few of the most interesting, and most important battles on the docket, the outcomes of which could decide title races in Europe's biggest leagues.

08.00 BST: Barcelona are not ruling out that Lionel Messi will see out the final year of his contract at the club after a meeting with the Argentina forward's father, sources have told ESPN's Moises Llorens and Rodrigo Faez.

The talks came after a week-long stalemate which began with Messi's bid to unilaterally rescind his Barca contract on Aug. 25, believing that a clause enabled him to leave for free.

Italian champions Juventus are continuing to try and tempt Luis Suarez from Barcelona to Turin, according to Sky Sports Italy's Gianluca Di Marzio.

The Italian journalist reports that Juve, Barca and the player himself are working together to help ensure the deal goes ahead, with Barca in particular keen to remove the Uruguayan's salary from their wage bill.

Di Marzio also revealed that a potential passport issue has been identified, with Juve already having filled their quota of non-EU citizens.

Suarez might need to cancel his Barca contract and take a work contract in Italy, which would then ease the issue and see him awarded a passport within 15 days. However, Juve don't see this is a deal-breaker. The bigger issue, they feel, is Suarez's severance pay, which could prove too costly.

Juventus are also still pursuing Arkadiusz Milik from Napoli, who has been made available this summer.

Manchester United are preparing to submit a new bid for Jadon Sancho, according to the Daily Mail.

United have been linked with Sancho all year in one of 2020's longest-running transfer sagas, but the England international's €120 million move to Old Trafford had gone quiet, particularly following the Reds' signing of Donny van de Beek.

Until now, that is. Sources had told ESPN's Mark Ogden that an inability to agree personal terms with the player and negotiate an agent fee with his representative was holding up a deal butm apparently, Man United are finalising those details now before approaching Borussia Dortmund with an official bid.

United are looking to capitalise on the momentum gained by the signing of Van de Beek, who signed for €45m earlier this week. And now they'll seek out Sancho's agent, Emeka Obasi -- who looks after the likes of Bukayo Saka, Todd Cantwell and Eddie Nketiah -- to help them seal the deal.

Arsenal are close to letting Lucas Torreira leave London for Fiorentina -- but only once a pending loan move for Dani Ceballos is confirmed.

The Sun believes that Ceballos is close to sealing a second loan spell from Real Madrid and, should the deal go through as expected, Torreira will then return to Serie A for between £21m-£24m.

Torreira struggled to cement a starting place in Mikel Arteta's side last season, as the Uruguayan made just 17 starts.

Arteta is keen to raise some cash in an effort to continue to rebuild his Gunners side ahead of the new season, with Atletico Madrid's Thomas Partay and Lyon's Houssem Aouar at the top of his wishlist.

Fiorentina are willing to pay £8m for the 24-year-old this season, with the option of a further £16m next summer.

- Tottenham Hotspur have made a formal offer for Barcelona B star Lucas de Vega, but it looks as though the Blaugrana will be keeping their Brazilian rising star. Sport is reporting that Barca see the midfielder as one of the key players for Barca B this season. Spurs were reported to have offered €2m, and Barca are looking for double that amount.

- AC Milan are looking for goalkeeping backup following Pepe Reina's move to Lazio, and Sport believes that the Rossoneri are considering a move for Barca stopper Neto. Neto won two Scudetti as backup to Gianluigi Buffon at Juventus, and he has also played for Valencia and Fiorentina. Neto was looking to leave Barca before the pandemic, but the Catalans will want to replace him before they consider allowing him to leave Camp Nou.