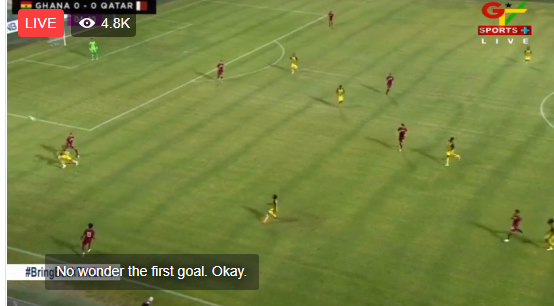 Good afternoon and welcome to the live text commentary session from the footballghana.com team on the friendly match between Ghana and Qatar.

The Ghana male senior national team has locked horns with its counterpart from Qatar this afternoon at the Titanic Sports Stadium in Antalya, Turkey.

The Black Stars and the Maroons are taking advantage of the exercise to prepare for qualifying matches to various tournaments in November.

And we are off at the Titanic Sports Stadium with Ghana playing from right to left as the opponent play from left to right. 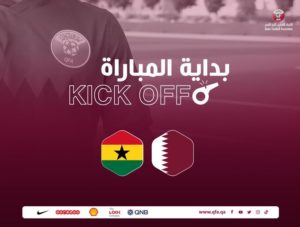 Qatar with the first chance of the game as danger-man Almoez sees his effort hit the post. Ghana goalkeeper Razak Abalora completely beaten on the occasion.

Still early days, but the Black Stars need to be careful.

Both teams now getting into the groove. It has been a good 10 minutes so far with the team's playing some good football.

Andre Ayew with a bursting run into the Qatar area, no support, unfortunately. The Swansea City star manages to send a feeble shot but it is well gathered by the comfortable Qatar goalkeeper.

Ghana with some good pressing play wins the ball in Qatar's half as Jordan Ayew initiates the attack. The Crystal Palace ace with a good display of pace sends a low shot, the goalkeeper saves but gifts a chance to Tariqe Fosu who slots the ball into the back of the net to give the Black Stars the lead.

We have done 25 minutes of the game at the Titanic Sports Stadium. It has been entertaining so far with the Black Stars growing in confidence by the minute.

Qatar stepping up with some fine play as they look for a goal to draw level before halftime. Ghana's so far standing firm and remaining compact.

Thomas Partey gives the ball away in a dangerous area, he will get away with it as Qatar fails to capitalize on the mistake.

We are approaching the 40th-minute mark. Still, Ghana leads by a loan goal.

Qatar draws level in the final minutes to the first half. Danger-man Almoez with a great run, beats the offside trap, lifts the ball over goalkeeper Razak Abalora, and slots his effort into an empty net.

That's it: The referee whistles for the end of the first half.

Ghana 1-1 Qatar. We are back after 15 minutes with the second half updates.

Ghana gets the second half underway. Both teams chasing a second goal to possibly win the game at the end of the 90 minutes.

Thomas Partey with a good run and a powerful drive but the Qatar goalkeeper pulls a fine save. Ghana piling pressure on the opponent and the first few minutes of the second half. Bright start for the Stars!!.

It's another chance for Ghana, Andre Ayew with the goal gaping but his efforts rattle the crossbar. That was close.

Injury to Qatar goalkeeper Sheeb. He cannot continue after a collision with Jordan Ayew. He will be replaced by reserve goalkeeper Mohammed Al-Bakri.

55 minutes played; Ghana has now restarted with the injured goalkeeper stretched off.

We have done 60 minutes of action at the Titanic Sports Stadium. Ghana remains the better side but nothing to show on the scoresheet as it stays 1-1.

Ghana takes the lead through Andre Ayew. The captain receives a strong pass from Thomas Partey and fires in from close range.

Ghana in control here and continues to dominate the opponent.

Goalll!! Samuel Owusu with a fine strike to give the Black Stars a 3-1 lead.

We are in the final 10 minutes of the game.