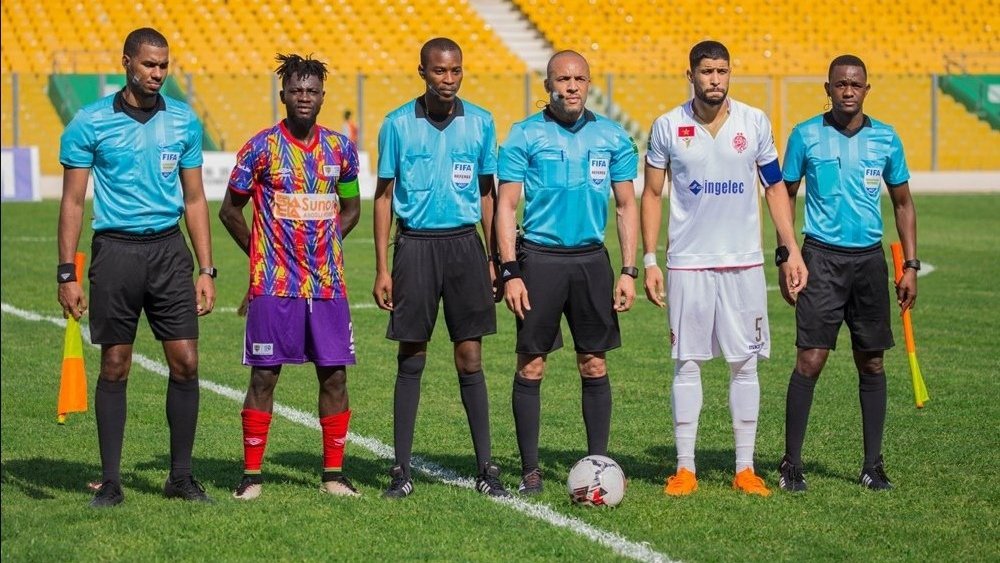 Good evening and welcome to today’s live text coverage of the second leg meeting between Wydad AC and Hearts of Oak in the CAF Champions League today.

The footballghana.com team is set up to provide a minute-by-minute update on proceedings as we prepare for kick-off in the next hour.

The Phobians last Sunday hosted the side from Morocco in the first of a scheduled two-legged tie in the playoff to the Group Stage of the elite continental inter-club competition.

Although it was a tough game, Hearts of Oak managed to secure a narrow 1-0 win at the end of the contest.

Keen on progressing from this stage, the Ghanaian club has travelled to Morocco and must today earn a positive result from the second leg against Wydad AC.

Ahead of the game, footballghana.com has intercepted the starting eleven named by Hearts of Oak head coach Samuel Boadu.

Below is the lineup:

As reported, Hearts of Oak have confirmed the starting lineup for the clash against Wydad.

How we line up against WAC of Morocco. #AHOSC#PositiveEnergy#CAFChampions pic.twitter.com/7lXZLfn3lD

The two teams have finished their warmups ahead of kick off in the next 15 minutes.

1’ We are off in Casablanca with Hearts of Oak having the first kick of the ball.

5’ Goal!!! Wydad Casablanca have equalized with a thumping header. It is all square on aggregates.

6’ Free kick in a dangerous position got Wydad AC. This could result in a goal.

7’ Goal!! What a goal. A low drive from the direct free kick results in a second goal for Wydad AC.

11’ Hearts of Oak finding it very difficult to play against the home team. It’s been Wydad in the first 10 minutes of the game.

14’ Good pressing from Hearts of Oak in the last three minutes. The team appears to be settling into the game gradually.

17’ Foul!! Daniel Afriyie Barnieh commits a foul, Reminder that a goal for Hearts of Oak will put the team ahead on aggregate.

19’ Goal!! Wydad AC with a third goal. What a game from the Moroccans.

23’ Officiating concerns as the referee gives every decision to the home team.

27’ Still nothing in it for Hearts of Oak as Wydad continue to enjoy the lion share of possession.

30’ We have done half an hour in today’s contest. It is Wydad that looks set to progress to the Group Stage of the competition.

40’ All hope appears lost for Hearts of Oak at this point. No chance created by the visitors as we approach the first half break.

Wydad AC goes into the break with a 4-0 lead.

47’ We are back underway for the second half of the game.

52’ Coach Samuel Boadu makes changes in a bid to avoid further disgrace to his team. So far it has not paid off.

55’ Tempers have flared up in the last five minutes but all calm now as the game continues.

58’ Goalkeeper Richard Attah almost concedes an own goal. Fortunately he is saved by the goal post.

61’ Goal!!! Wydad a AC scores a sixth goal. It has been a humiliating evening for Hearts of Oak.

70’ Mohammed ALhassan gives the ball away in a dangerous position. He is lucky Agyenim Boateng is there to tidy things up.

75’ Kofi Kordi strikes a ferocious shot at goal but it is unable to threaten the diving goalkeeper as it flies over the bar.

78’ Daniel Afriyie Barnirh commits a silly foul. He is lucky to escape a booking there.

84’ Substitute Patrick Razak pulls one back for Hearts of Oak. The visitors need four more to turn this around.

88’ Hearts of Osk have been good in the last 10 minutes after committing bodies forward. The time needs more time but it’s one luxury they do not have.

90’ We have exhausted regulation time here. There will be just two minutes of added time.

Full Time; It is all over here. Wydad AC eliminated Hearts of Oak from CAF Champions League with a 6-2 aggregate win.