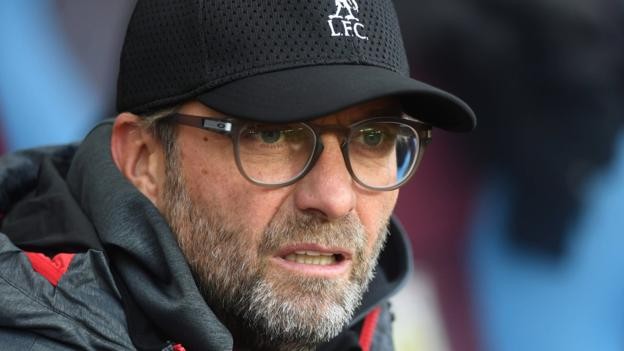 Liverpool manager Jürgen Klopp says the assault that resulted in serious brain injuries to Reds fan Sean Cox is "the lowest point" of his time at the club.

Cox, 54, was attacked by Roma fans before a Champions League game at Anfield in April 2018.

He will return to the ground for the first time since the incident for Sunday's game against Manchester City.

"I hope we can organise that I can see him for a couple of minutes before the game. I really want to," said Klopp.

After almost 18 months of treatment in the Republic of Ireland, Cox moved to a specialist neurological facility in the north of England for a 12-week rehabilitation programme, focusing on developing his speech and movement.

His wife Martina said he had made progress since the attack, but it has been slow and "his speech remains very challenged".

A legends charity match staged at the Aviva Stadium in April this year raised 748,000 euros for the Sean Cox Rehabilitation Trust.

Cox and his family will be guests of Premier League leaders Liverpool for the game against City.

"When it happened to Sean, it was the lowest point of my time at Liverpool," said Klopp.

"We all know it's not finished yet and there is a long way to go.

"If we can give him the opportunity to come back to watch a really big game - and that he wants to do that - that for me, coming from a really low point, is one of my highlights since I have been here."

Italian fan Simone Mastrelli was sentenced to three and a half years in prison after pleading guilty to assaulting Cox.

"From a sport's point of view this rivalry is getting bigger and bigger," said Klopp.

Meanwhile, Klopp reassured City they should have no concerns about their arrival at Anfield.

The Etihad side's bus was attacked as it made its way to the stadium before a Champions League quarter-final in April 2018 and City have sought assurances that there will be no repeat.

"If someone from City is concerned still, it's our fault," said Klopp.

"We all didn't throw a bottle, but it was one of us. All of us have to make sure that something like that never happens again.

"We will do everything to make sure it doesn't happen again."