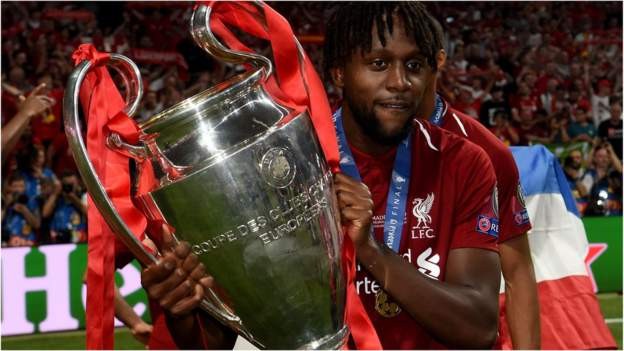 Manager Jurgen Klopp has confirmed that "Liverpool legend" Divock Origi will leave the club in the summer.

The 27-year-old Belgium striker is out of contract at the end of the season, having not played enough games this term to trigger a one-year extension to the deal.

Origi, who has been linked with AC Milan, has scored some of Liverpool's most memorable goals in recent years, despite playing mainly as a substitute.

"He is, and will be for me, forever a Liverpool legend, one of the most important players I ever had.

"That might sound strange with the amount of games he had but it was a pure joy to work together."

Origi was signed by Brendan Rodgers in 2014 and has scored 41 goals for the Reds in 175 games, his time at Anfield broken up with loan spells at Lille and Wolfsburg.

His most famous goals include two in Liverpool's stunning comeback win against Barcelona in the Champions League semi-final second leg in 2019 and the second goal in the 2-0 win over Tottenham in the final.

Klopp said he expects Origi will get a "special reception" when Liverpool play Wolves at Anfield on Sunday, when they could still seal only a second title in the Premier League era should they win and Manchester City fail to beat Aston Villa.

"He deserves all good thoughts we can generate somehow for his future," added Klopp. "He is an outstanding player, outstanding boy. Everybody in the team loves him."

Here are a few of his best moments.

Liverpool v Barcelona, Champions League semi-final, 7 May 2019 Origi was one of the heroes of Liverpool's most famous Anfield comeback, against Barcelona

In 2019, Liverpool hosted Barcelona in the second leg of a Champions League semi-final that most people considered already settled after the Catalan giants had won 3-0 at home.

The Reds also had major injury problems. With both Mohamed Salah and Roberto Firmino out, Klopp had to call on Origi and Xherdan Shaqiri to partner Sadio Mane in an unfamiliar-looking front three.

Origi opened Liverpool's account with a seventh-minute tap-in and in the 79th minute finished coolly from a quickly taken corner from Trent Alexander-Arnold to make it 4-0 on the night and complete the unlikeliest of comebacks, sending Liverpool to their ninth European final.

It has gone down in Kop folklore.

Having played such a key part in getting them there, it was only fitting that Origi should also be the man to seal victory in the 2019 Champions League final.

Liverpool - back to their familiar front three of Salah, Firmino and Mane - went ahead in the second minute via a penalty from Salah.

But they could not put Premier League rivals Spurs away until, with three minutes of normal time remaining, Origi - on as a second-half substitute for Firmino - did what he does best, slotting home with a fine strike to kill the game.

In the course of that Champions League campaign, Origi had three shots and scored all of them. Marksman.

Liverpool's local rivals Everton will definitely be glad to see the back of Origi. He has an incredible goal-scoring record against them - six goals in 10 appearances. Only Steven Gerrard, with seven, has scored more home league goals for Liverpool against the Toffees.

In December 2018, Origi was responsible for a bizarre late winner in the derby. Six minutes into added time with the game goalless, visiting keeper Jordan Pickford horribly mishandled a sliced shot from Virgil van Dijk, clawing the ball from above the crossbar into the path of Origi, who headed the ball into an empty net from three yards out.

It was another super-sub moment from the Belgian, who had been brought on in the 84th minute for his first Premier League game since August 2017.

Klopp went tearing on to the pitch after the final whistle and had to apologise afterwards for the vigour of his celebrations.

One year later, and Origi was once again tormenting Pickford when table-topping Liverpool thrashed their rivals 5-2 to retain an eight-point lead in the Premier League and help push Everton boss Marco Silva towards the Goodison exit.

Origi opened Liverpool's account in the sixth minute and then, just after the half-hour, brought down a Dejan Lovren ball with a lovely touch, before lofting it over Pickford's head.

Origi featured prominently in another dramatic victory when Liverpool hosted Arsenal in the League Cup fourth round in 2019.

With a packed fixture schedule, the hosts fielded a very young team and the match was an absolute thriller, finishing 5-5.

Liverpool twice came from behind, with Origi scoring two, the latter a sublime, acrobatic, scissor-kick in the 94th minute to take the tie to penalties - which Liverpool then won.

Of all the big European nights Liverpool fans have enjoyed in recent seasons, not many are more memorable than a dramatic comeback against Borussia Dortmund in the Europa League in 2016.

This was a Klopp side in the days before Mane and Salah's arrival.

After a 1-1 draw in Germany, Liverpool quickly went 2-0 down at Anfield, which back in the distant days of the away-goals rule left the Reds needing to find three goals to stay in the competition. The match eventually finished 4-3, with Liverpool going through 5-4 on aggregate.

This time, defender Lovren scored the late winner for Liverpool, but the man to open the Reds' account and start the fightback was none other than Origi.

The match was an early taste of what might be expected under Klopp - Origi has been there for it all.

Get that statue built.