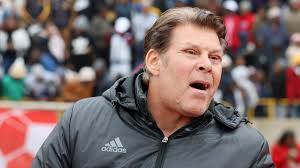 A raging controversy around the appointment of a controversial new coach - Belgian Luc Eymael - forced South African Premier League side Chippa United to reverse the decision they had made to appoint him just 24 hours earlier.

The decision by the Nelson Mandela Bay club's chairman, Siviwe Mpengesi, to appoint the 61-year-old Belgian caused outrage - as he was fired by Tanzanian side Young Africans in July after allegedly labelling the club's fans "illiterate" and "monkeys."

Almost immediately after Eymael's position had been confirmed, the South African Football Association responded by issuing a statement in which they said they would write to the Minister of Home Affairs to oppose the granting of a work permit.

A day later, Eymael, who had previous stints with PSL clubs Black Leopards, Polokwane City and Free State Stars, had been replaced by Dan Malasela, returning to the hot seat for a fourth stint, becoming becomes Chippa United's 28th coaching appointment in their ninth season of top flight football.

The Chilli Boys stirred massive controversy after their initial appointment of Eymael was announced shortly after the sacking of former Lesotho international Lehlohonolo Seema, who had been with the club for five months.

"We find it deeply offensive that as the global football community is united in solidarity around the Black Lives Matter campaign, Chippa United FC would see fit to hire such a character," the SAFA statement said.

It also pointed to the club's home city, Nelson Mandela Bay - formerly Port Elizabeth - being named after "the founding father of the nation, Tata Nelson Mandela, the champion of a world free of racism and other forms of discrimination."

The pressure forced the club to backtrack.

"After having announced Mr Eymael's appointment until the end of the season on Wednesday 23 December 2020, the club has considered public outrage," a club statement said.

"There was also the reputational damaged cause to our brand and that of our stakeholders, partners as well as our sponsors.

"We would like to clarify that the initial decision to make this appointment was based on Mr Eymael's coaching track record, where we felt he was the best person to take the club towards our desired top half finish in this DSTv Premiership season.

"Our withdrawal of this appointment is an acknowledgement of our stance on such matters (of anti-discrimination) with the club also having informed Mr Eymael and his representatives of our position."

The South African website FARPost has reported that Eymael has denied making the comments as accused by Young Africans FC.

"I am telling you I never said those words, that's first of all. I have never been found guilty, I never went to a DC, and I never had any termination of contract letter.

"I have been working for 10 years in Africa and I have never had a problem. Do you think for one minute if I was racist, I could have stayed 10 years in Africa? It's impossible. I am very surprised because it's like its political interference."