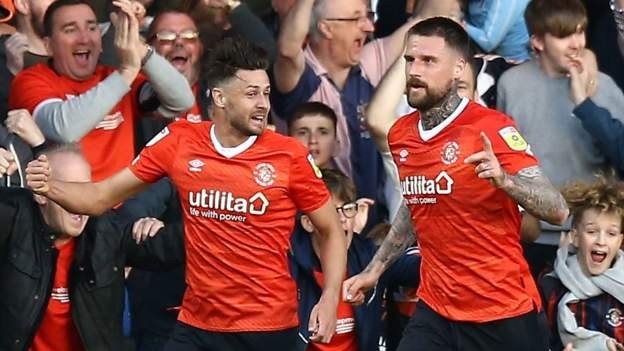 The Championship play-off semi-final between Luton and Huddersfield is finely poised after the first leg ended in a draw at Kenilworth Road.

Both sides had appeals for a penalty turned down in an exciting encounter.

They will meet again in Monday's second leg, with the winner facing Nottingham Forest or Sheffield United at Wembley on Sunday, 29 May for a place in the Premier League.

Huddersfield should arguably have been awarded a spot-kick in the opening 10 seconds when Harry Toffolo was barged over by James Bree while trying to get to Ollie Turton's cross.

The visitors then had to absorb a spell of pressure - but went ahead on the counter-attack after Luton were caught out by Toffolo's ball forward.

Sinani, on loan from Norwich, capitalised by taking on Bradley and firing past keeper Matt Ingram at his near post.

And Luton then had a penalty appeal of their own waved away by referee Robert Jones when Cameron Jerome burst through on goal and went down after tangling with Naby Sarr.

Huddersfield dominated possession as the Hatters tired in the second half, but both struggled to create clear-cut chances.

VAR in the Championship?Nathan Jones and his Luton coaching staff appealed to the fourth official after Jerome appeared to be pulled down

This season's play-off final will see the video assistant referee used in the Championship for the first time.

Had it been operating in this game, the outcome might have been very different.

As well as two possible penalties in the first half, there could also have been one in the second when Bradley grappled with Sarr in the area and seemed to drag him down.

VAR might also have resulted in Luton's goal being disallowed as Harry Cornick, who was in an offside position, attempted to make contact with Naismith's delivery before Bradley directed the ball into the net from close range.

A number of managers in the second tier have argued for the introduction of VAR in the division, and would no doubt point to this match as an example of why.

Neither the Terriers nor Luton were rated among the promotion favourites at the start of season.

Regardless of what happens in the second leg, both clubs have made a mockery of those odds.

Huddersfield finished the regular season in third place and had won six of their previous seven matches before the trip to Bedfordshire.

They showed their quality while controlling possession in the second half against a determined Luton side, that has maintained a promotion challenge despite a limited budget and having been plagued by injury problems with Pelly-Ruddock Mpanzu, Gabriel Osho, Fred Onyedinma and talisman Elijah Adebayo among those sidelined.

Nathan Jones' men will be no pushovers at the John Smith's Stadium, but Huddersfield will be pleased to begin their home leg on level terms.

"In the second half we started to create more attacks and, even if we didn't create clear chances, it completely changed the feel of the game.

"We are now in exactly the same position as when we arrived in Luton. What we want to do on Monday is play another game of 90 or more minutes and the more we concentrate the more happiness we can give to our fans.

"We need to be focused on the things that we do - how we attack and how we defend."

"I thought we were excellent first half, really were front-footed and controlled the game.

"We got hit with a counter-attack, that was probably it, but we had some real good chances and I was a little bit disappointed we didn't have a lead.

"Second half they came into it, controlled the play a little bit more in front of us - without really causing us massive problems - and I thought we defended our box fantastically well.

(On Cameron Jerome penalty shout): "It's nailed on, it's clear. Because they had half an appeal in the first seconds of the game, he [the referee] hasn't given it. They don't have that, he gives it. And it's a red card.

"It's last-ditch, he's brought him down. It's a real terrible decision."

Tom Lockyer (Luton Town) wins a free kick in the defensive half.

Jordan Rhodes (Huddersfield Town) wins a free kick in the defensive half.

Jordan Rhodes (Huddersfield Town) is shown the yellow card for a bad foul.

James Bree (Luton Town) wins a free kick in the defensive half.

Attempt missed. Tom Lockyer (Luton Town) header from the centre of the box is too high. Assisted by Kal Naismith with a cross.

Attempt missed. Jordan Clark (Luton Town) right footed shot from outside the box is too high. Assisted by Amari'i Bell.

Attempt missed. Tom Lees (Huddersfield Town) header from the centre of the box misses to the right. Assisted by Danel Sinani with a cross following a corner.