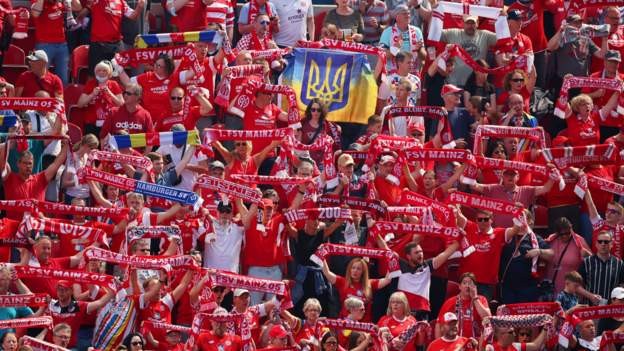 A Mainz supporters' group said it asked for the game to be cancelled to "remind Mainz of the values in its mission statement".

Bundesliga side Mainz will play their pre-season fixture against Newcastle despite a fan protest about the English club's Saudi Arabian owners.

A fans' group said the match should be cancelled as Newcastle was a "vehicle for asserting the interests of a regime that tramples on human rights".

It also said the country's "policies are diametrically opposed to the values ​​and mission statement of Mainz 05."

Mainz said cancelling was "not feasible" for "contractual" reasons.

It also said the match in Austria on 18 July would go ahead because it was "important for their pre-season preparations" but it would meet with fans to discuss the issue.

Mainz board member Christian Heidel said: "Were we to not honour our contractual obligations this could have serious legal and economic consequences for us."

Newcastle's ownership model has been controversial since Saudi Arabia's Public Investment Fund (PIF) took over at the club last October.

Human rights groups said the move is an attempt to "sports-wash" the country's image, which the Mainz fans' group agreed with.

Upon taking over the club, Newcastle's owners had to provide "legally-binding assurances" to the Premier League that the state would not control the club despite Crown Prince Mohammed Bin Salman also being the chair of PIF.

The Mainz supporters' groupexternal-link said it wanted to use the planned game as an opportunity to "remind Mainz of the values in its mission statement.... in which, among other things, democratic values ​​and an offensive attitude against exclusion and discrimination are central elements."

It added: "We recall that Saudi Arabia is not only an absolute monarchy in which democratic participation of its citizens has no place, but a country in which fundamental human rights are systematically disregarded.

"With the decision to play a friendly against Newcastle United, Mainz 05 is sending a signal... that the values ​​of the mission statement are not binding" and "also actively offers the Saudi regime a stage and thus indirectly recognises it politically.

"We call on Mainz 05: Take a stand! Read your mission statement! Cancel the game against Newcastle United!"

Mainz chairman Stefan Hofmann added: "We didn't expect the reaction we got from some fans. We respect them and regret that these concerns have arisen because it's our responsibility to start the new season as one big unit together with our fans."