The FC Lorient forward was hoping to succeed countryman, Andre Ayew to the gong but was beaten by Morocco and Lille midfielder Soufiane Boufal despite an impressive debut season with his French side.

The Ghanaian arrived in France midway through the season but his impressive return of 13 goals in 25 appearances earned him a nomination for the annual France based African best player award. 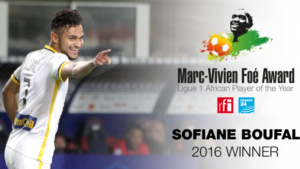 The annual award is named after the Cameroon international who died aged 28 of a heart attack in 2003.

Waris joined FC Lorient from Turkish Super Ligue side Trabzonspor but has since found his shooting boots in France with an average of a goal in every two games.