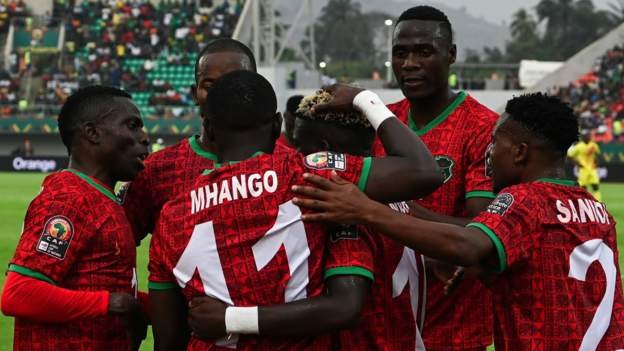 Gabadinho Mhango scored twice as Malawi beat Zimbabwe 2-1 to boost their hopes of a first-ever appearance in the last 16 at the Africa Cup of Nations.

Zimbabwe went ahead with a superb 38th-minute header from Ishmael Wadi, but Mhango equalised five minutes later with a controlled half-volley.

And Mhango put the Flames ahead in their Group B clash by dinking over the keeper 13 minutes into the second half.

Malawi sit a point behind Guinea and Senegal, who both have four points.

The victory is only Malawi's second win at the Nations Cup, with their first - a 3-0 victory over Algeria - coming upon their tournament debut in 2010 when they exited in the group stages.

The Flames know victory over pre-tournament favourites Senegal in their final group game on Tuesday will see them through to the knock-out stage, while a point could be enough to progress as one of four best third-placed sides.

Both sides had lost their opening games 1-0, with Zimbabwe beaten by a 97th-minute Senegalese penalty and Malawi by Guinea, and it was the Zimbabweans who had the better first-half openings.

Warriors centre-back Gerald Takwara sent a free header down and wide, while Wadi saw one headed effort go close and another pushed behind by Malawi keeper Ernest Kakhobwe.

Wadi's opener was a fine header from Bruce Kangwa's left-wing cross, which he directed back across goal from 14 yards and looped over the keeper.

Another good ball into the box - this time by Francisco Madinga - set the platform for Mhango to quickly equalise at the back post and the forward then completed the comeback with a composed finish.

The Flames were still without head of technical panel Mario Marinica but had several players available again after a Covid-19 outbreak, having only been able to name four substitutes in their opening game against Guinea.

Defeat means Zimbabwe become the first team to be eliminated from the Nations Cup, as they can no longer finish third in the group.

Attempt missed. Kudakwashe Mahachi (Zimbabwe) left footed shot from outside the box is high and wide to the left from a direct free kick.

Tinotenda Kadewere (Zimbabwe) wins a free kick in the attacking half.

Gomezgani Chirwa (Malawi) wins a free kick in the defensive half.

Kelvin Madzongwe (Zimbabwe) is shown the yellow card for a bad foul.

Gabadinho Mhango (Malawi) wins a free kick in the defensive half.

Gomezgani Chirwa (Malawi) wins a free kick in the defensive half.